Scott Walker's budget ushered in a 7 day work week, doing away with required "one day of rest."

Oddly, Republicans continue to pretend employers would never threaten current employees with the loss of their job if they didn't "volunteer;" they could always bringing someone who will, right?:

Seven-day workweeks would be allowed and provisions for a "living wage" would be struck from state statutes, nullifying a lawsuit filed by Wisconsin workers aimed at pressuring Gov. Scott Walker to raise the minimum wage, under last-minute additions to the state budget ... allow factory and retail employees to work seven days without a day off, as long as they said in writing that they were doing so voluntarily.

Radio host and author Thom Hartmann doesn't appear to be aware of the 7 day work week law, or he would have added that to the story below about Scott Walker's speech announcing his run for president. Walker referenced a way of thinking that goes all the way back to the early 1900's. No surprise there: 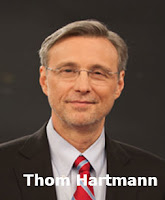 If you want to catch a glimpse of what America would look like under President Scott Walker, you need to turn back the clock to one of the darkest periods in 20th century American history – the Lochner Era.

A bakery owner named Joseph Lochner sued the state of New York over its Bakeshop Act, which limited the number of hours bakery employees could work to 10 hours a day and 60 hours a week. Lochner … took it to the Supreme Court in 1905, he got the result he wanted. In a close 5 to 4 decision, the justices struck down the Bakeshop Act, citing Lochner’s right under the 14th Amendment to run his business without “state interference.” Apparently, the Bakeshop Act violated that most fundamental of liberties -- the right of employers to work their employees to death.

Until the mid-1930s, the Supreme Court would go on all-out rampage against workers’ rights … it struck down, among other things, child labor laws, minimum wage laws, and laws banning “yellow dog contracts” - contracts that forced workers to say that they wouldn’t join a union.

The guiding principle in most or all of these decisions was the idea that the government’s power to protect workers was limited to protecting their “health and safety” … things like minimum wage laws were struck down because they went beyond protecting "health and safety..."
There is, by the way, no “right to contract” in the Constitution. The Supreme Court made it up, just like it made up corporate personhood and money as speech. Everyone serious thinks the Lochner case was a big mistake. Everyone that is, except for Scott Walker.

As Ian Milhiser has pointed out in a great piece for ThinkProgress, buried deep in Scott Walker’s speech announcing his run for president was a shout-out to the “health and safety” thinking of the Lochner era. He said, "As long as you don’t violate the health and safety of your neighbors – go out and start your own career, build your own business, live your own life.” Sounds harmless enough, right?

It does, until you remember that this line of thinking was used to strike down child labor laws, minimum wage laws, and basically any kind of law that kept workers from becoming wage slaves.