Bottom line: Republicans hate education and don’t like funding it. The cuts they’ve made to the UW and K-12 were the biggest in the nation, along with their attacks on student lending.

Just remember, Republicans are the guys that gave us crushing student debt, because they reduced public funding of our state colleges, and that directly increased tuition. More on that and a GAO study is below.

The fact is, Dumb Ron Johnson doesn’t get that. Instead, he’s cherry picked a “study” from the NY Fed, that fits his narrative; government sponsored student loan programs have jacked up tuition. Because tuition increases coincided with the GOP's attack on colleges, many tend to believe the Republican lie. Here’s the study and false premise Johnson offers as proof. WPR: 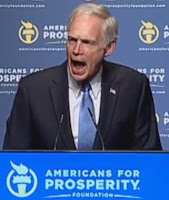 (Ron Johnson) cited a study released this month by the Federal Reserve Bank of New York that said that for every new dollar received in Direct Subsidized Loans, tuition goes up by 65 cents.

"As well-intentioned as these programs are, by enticing our children to incur, I think collectively $1.2, $1.3 trillion of student loan debt, we have actually made college less accessible, because we’ve made it less affordable," Johnson said. Johnson said the solution is to give students and their parents information on "all the options" after high school … "We need to kind of break out of, you know, this paradigm where we’re saying everybody has to get a four-year degree.”

Oddly, the “study” Johnson points to never compared GOP defunding to the rise in tuition's. It should have, because even in their own analysis of  2 year community colleges, they inadvertently mentioned it. Check it  out:

Four-year institutions charge higher tuition, on average, resulting in higher dependence on external funding. The two-year sector is almost entirely dominated by public two-year colleges, also known as community colleges … tuition is low, averaging just $2,600 in 2012, largely due to the large share of revenue that is funded through government sources (70%).

Oops. Imagine that, public funding reduces tuition. I wonder if that could work at a 4 year college?

Oh, if you thought manufacturing in the U.S. was on the decline, than you’re not thinking like Scott Walker and Ron Johnson. They’re trying their damndest to return manufacturing to the glory days.

Johnson said there are "tens of thousands" of manufacturing jobs in Wisconsin that are not being filled, so high school graduates can opt for one of them.

As I mentioned, the Government Accountability Office took a look at this around January of this year, and surprise, their analysis is just the opposite of Dumb Ron Johnson's. Wrong again, big time:

These days students pay more of the cost of attending public universities than state governments, a shift that is making college less affordable, according to a recent Government Accountability Office report.

1. Researchers found that the money public colleges collect in tuition surpassed the money they receive from state funding in 2012. Tuition accounted for 25 percent of school revenue, up from 17 percent in 2003. State funding, meanwhile, plummeted from 32 percent to 23 percent during the same period.

2.  That’s a far cry from the 1970s, when state governments supplied public colleges with nearly 75 percent of their funding, according to data from the Federal Reserve Bank of Cleveland.

It turns out the Republican backed "free market" deregulation and voluntary regulation of Wall Street resulted in increased defunding of education and hikes in tuition. Don't let them say otherwise:

The GAO said the collapse of the financial markets in 2008 caused … State budgets (to) responded by slashing higher education funding by 23 percent per student. Consider the federal Pell Grant program, which awards money that does not have to be repaid to students whose household incomes are typically $30,000 or less. The maximum Pell award covered 77 percent of the cost of attending a four-year public university in 1980, but that fell to 36 percent by 2011, according to the Education Trust.

So what is Ron Johnson talking about? I don't think even he knows. But it sure sounds good for all those low information voters.

Of course Scott Walker's attempt to cut UW funding exposed that scheme to conservative alums, who might be to happy now.
Posted by John Peterson, Democurmudgeon at 7/24/2015 08:24:00 PM