The Republicans offer up alarming Dystopian vision of the "American Dream!"

I don't know why I was stunned by the dystopian-like agenda pursued by House Republicans, led by Paul Ryan. Just search this blog with the term "role call," or the name "ryan" and "ribble," you'll see breathe taking bills Republicans have been passing for years.

We're now "the land opportunism." Mad Max, Hunger Games and Fountainhead were works of fiction, not an actual blueprint for government policy. 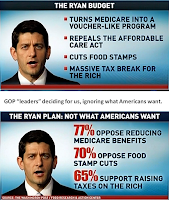 If I use my conservative friend in Milwaukee's absolute hatred of government as a template, assuming he's your typical Republican voter, then it's clear nothing else matters; not laws; not human safety; not education; not health care; not internet freedom; not clean water; not pollution; not job training; not Pell grants; not saving billions on health care; not protecting retirement savings...etc.

House Republicans are trying to unravel two centuries worth of progress, the stuff that built the American dream.

It would be easier to call this a political suicide note, but oddly it isn't. In the name of small government, Republicans want to... 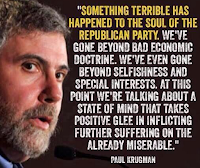 1. Prohibit any federal money from being spent on the Affordable Care Act.

4. Reverse new rules requiring retirement investment advisers to prove they have no financial conflicts of interest.

6. A bill would block the Food and Drug Administration from reviewing e-cigarette marketing.

7. Keep the FCC from carrying out “net neutrality” regulation of the Internet.

8. Push a “conscience” rider that would let employers in the District of Columbia refuse health insurance coverage for any service on moral grounds, and hire and fire based on women’s use of health services.

9. Either reduce full-day, full-year service for 570,000 young children in Head Start or cut 140,000 children from the program altogether.

10. Funding for job training would be almost $500 million less than the White House requested.

11. Cuts to the National Park Service would delay about 70 percent of its construction projects and more than a third of its repair and rehabilitation efforts

12. A bill would also cut $370 million from the Pell Grant higher education program.

13. The main federal family planning program, Title X, would be eliminated … a major strike against women’s health care Title X, the only federal grant program dedicated solely to providing individuals with comprehensive family planning and related reproductive health services, including contraception. 90% of the people Title X serves have incomes below 200 percent of the federal poverty level, and 63 percent are uninsured. 6 in 10 women who access health care services from a Title X-funded health center consider this their main source of health care … saves taxpayers money: For every public dollar invested in family planning, the American taxpayer saves approximately $7 in Medicaid-related costs. Nearly half of all births in the U.S. are paid for by Medicaid; the average national cost for one Medicaid-covered birth is $12,770. This is a stark contrast to the $239 per-client cost of publicly funded contraceptive care through Title X family planning. It is estimated that Title X saves taxpayers nearly $7 billion a year.