Thursday saw an explosion of critical tweets from liberals, libertarians, and even "stand with Walker" kooks that haven't seen a GOP bill they didn't like, reacting to a move to shut Wisconsinites and the media out of state government and the peoples right to know. All under the guise of a very tight budget, or so said Sen. Alberta Darling, who "inherited" her own previous budget (old talking points die hard): 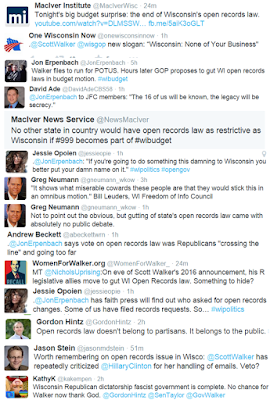 The proposal blocks the public from reviewing nearly all records created by lawmakers, state and local officials or their aides, including electronic communications and the drafting files of legislation. Exempt “deliberative materials” from the public’s view … Deliberative materials are defined in the motion as “communications and other materials, including opinions, analyses, briefings, background information, recommendations, suggestions, drafts, correspondence about drafts, and notes, created or prepared in the process of reaching a decision concerning a policy or course of action” or in preparing a draft of a document.

If you thought that was bad, legislators made sure what happened to Sen. Lea Vukmir wouldn't happen to them. Remember this jaw dropper from September 2013?


jsonline: State Sen. Leah Vukmir is trying to sidestep an open records lawsuit by claiming she can't be sued while in office — a legal argument that, if successful, would let all lawmakers ignore the open records law.Vukmir contends in her motion that the legislative session lasts the entire term of a state representative — meaning legislators are in session from the moment they are first elected until they leave office, perhaps many years later. The Center for Media and Democracy sued Vukmir (R-Wauwatosa) in June contending she had violated the open records law by not turning over records related to her involvement with the American Legislative Exchange Council-ALEC.

That won't be a problem anymore:


The motion also gives a legislator a “legal privilege” or right to refuse to disclose and to prevent a current or former staff member from disclosing a wide array of types of communication that occurred during the lawmaker’s term in office.

"This is the single most sweeping and outrageous affront to Wisconsin’s tradition of open government that I have seen in my quarter-century of involvement with the (Wisconsin) Freedom of Information Council,” council president Bill Lueders said. “If Wisconsin wants to take a giant leap into corruption, I think that’s a good move for them to make,” Lueders said. “It’s cowardly. It’s dirty. It violates the tradition of the state of Wisconsin, and it shows what miserable cowards that these people are that they would stick this in an omnibus motion.” 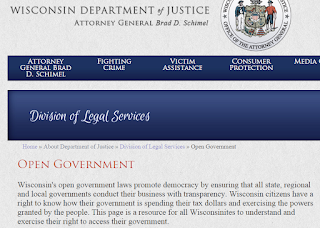 Of course Republican and now state Attorney General Brad Schimel, made open government a big deal in his campaign. Go to the AG's site and you'll see this now empty bullshit to the right:

A spokesperson for the nonpartisan Legislative Reference Bureau testified one provision creating a broad “legislator disclosure privilege” has no counterpart in any other state. Despite voting for the motion, Republican members of the panel all professed not to know who proposed the public-records changes.

The award for the most Orwellian way to view this affront to open government?


GOP Rep. Dean Knudson of Hudson said the changes clarify what is a record for lawmakers and would “make it easier for us all to stay on the right side (of the laws).”

Just as mind boggling is this down-the-rabbit-hole conclusion from Rep. Nygren:

Breaking it down to its bare essence...

“I think this is a dark day for Wisconsin government,” said Brett Healy, president of the MacIver Institute. “This appears to be a huge step backwards for transparency. Taxpayers deserve more transparency, not less, and the insertion of this language at this late date in the budget process is really disheartening for those who value open government … “we’re with Sen. Erpenbach on this one. This is a bad idea.”