Walker to do for country what he's done for Wisconsin...

...like unemployment. The only thing Scott Walker has been hanging his hat on, minus the non-participation rate, is the low unemployment number. Well, that might be changing, and not in a good way: 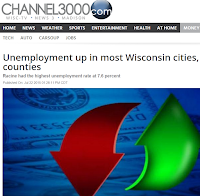 In the anti-business liberal hell hole of the state, Madison and Dane County, just what you'd expect:

Madison and Dane County had the lowest unemployment rates for both a city and county at 3.5 percent.