Are Republicans this Desperate? Now say Democrats, not GOP, the party of Big Business.

We’re supposed to believe Republicans finally took a stand against big business, and killed off market distorter and money redistributor the Export-Import Bank.

If you aren’t already laughing than you must be a Republican. Global billion dollar businessmen David and Charles Koch were against it…gee, I wonder why, they don’t have their own market shares to protect? You think?

Since the Republicans own the title, “the party of big business,” you have to wonder why they’re doing the old switcheroo, vilifying Democrats for being in the pocket of business.

The article “On Ex-Im Bank, the Democrats Are the Real Corporate Shills,” blasted Elizabeth Warren for supporting the Export-Import Bank, established in 1934 by FDR during the Great Depression.

But Warren offered the empty, canned defense that Ex-Im “helps create American jobs and spur economic growth,” but the truth is that the bank exists to serve the interests of a powerful few at the expense of the not-so-powerful many she claims to champion.

Of course it does, and Republicans just hate that don’t they?

They (Democrats) argue that it is the interests of small businesses that they are protecting. That could be true, provided you think that businesses with up to 1,500 employees and $21.5 million in revenue qualify are small, as the bank defines them.

Ironic isn’t it. Republicans are now willing to briefly abandon their favorite lie about supporting “small business” (not so small after all) just to say to the Democrats, “I know you are but what am I.”

But the big election year lie about our “big business” Democrats is exposed in with this short paragraph listing some of those big businesses; like green energy, saving the auto industry...etc:

They support the Department of Energy’s 1705 loans, which mostly go to wealthy energy companies (PDF), and they never fail to join Republicans in saving other corporate energy subsidies. They support Obamacare, which among other things amounts to a huge giveaway to the insurance industry. They supported the auto and bank bailouts, and for all their complaints about Wall Street, they passed a law, Dodd-Frank, that in some ways protects the big financial institutions that they claim to despise.

That last sentence is a real whopper, especially flipping the whole reason behind Dodd-Frank and why Wall Street and the GOP oppose it so ferociously. 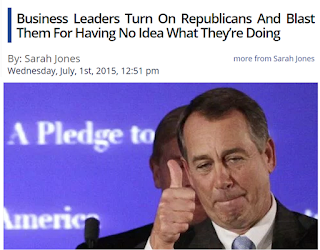 In another article, pictured on the right, I thought this summed it up well, but in a good way (not as dupes to big business):


Republicans have ceded being the party of fiscal responsibility and the party of national security to Democrats, who have done better on both fronts in modern times. Now it seems they are hell bent on ceding “the party of business” to Democrats as well.