Pro-Life says Abortions cause boyfriends to beat up women.

...sent me to this story that quite frankly, left me stunned. Want to know what "pro-life" really means to conservative? Let's just say that bad women who get abortions bring this on themselves.... 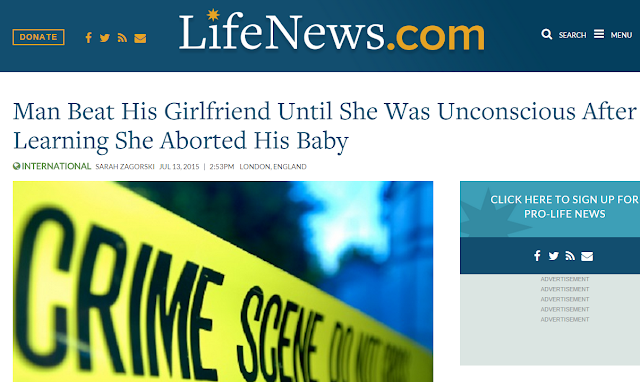 They love life don't they? Time to blame the victim. Check out the sick concluding paragraph:

Despite her obvious injuries and unconscious state, Billinger, 51, chose not to call for help and instead sat down in the living room of Ms Granger’s Newlyn flat. Ms Granger, who was ill with serious liver disease at the time of the assault, was taken to hospital where it was discovered that she had also suffered a perforated liver in the vicious beating. Garth Richardson, for the Crown Prosecution Service, said: “Her prognosis is not good.”

While abortion activists like to talk about how abortion is supposedly beneficial for relationships, this is one of countless stories LifeNews has reported over the years showing either a partner engaging in violence towards a wife or girlfriend who has had an abortion or a husband or boyfriend attacking his partner because she refused to have an abortion. Either way, it’s additional evidence that abortion is not beneficial for women or their relationships.