UPDATE: Scott Walker must either have a hell of team of powerful insiders in place, or a group of thugs ready to break a few legs if people don't comply. The Walker campaign first got Stephen Moore to deny he talked to Walker about immigration, and now...a Twitter representative? Yea, Twitter was at fault? This guy is scary:


A Twitter representative said in an emailed statement, "We're looking into today's issue, and we've determined the Walker team was not at fault."

The Original Story: It looks like Scott Walker’s unlimited fundraising days are over.  Walker announced his presidency complete by accident too. Nice start Scottie. Here's his official tweet: 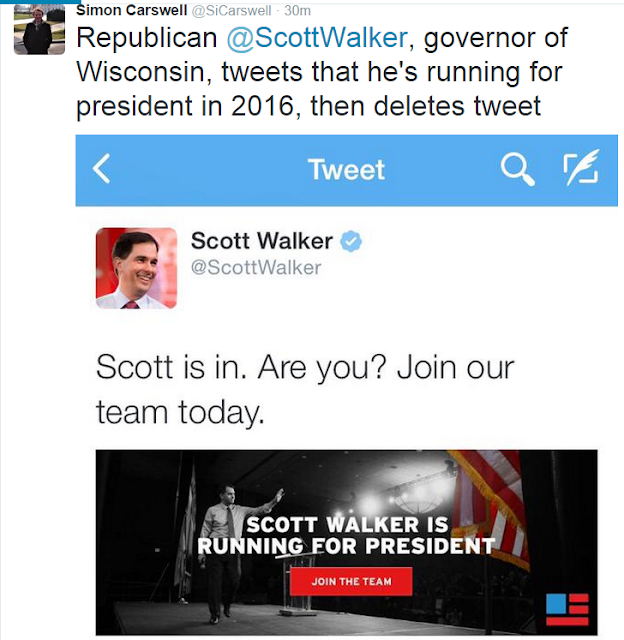 That's a big bumbling mistake by Walker, who now has to report all the cash...all legal-like:

On the first report (Walker) files after he becomes a candidate (i.e., after he either receives contributions or makes expenditures which exceed $5,000), his committee must report the donations from his friends as "contributions" and the costs of the poll as "expenditures." Had (Walker) not become a candidate, there would have been no obligation to report these financial transactions, and the donations made to help pay for the poll would not have counted as contributions.

Amazing, Walker tripped over his own incompetence in his glorious run for president.
Posted by John Peterson, Democurmudgeon at 7/10/2015 05:43:00 PM