Republicans have always hated big government, except when it serves their own purpose (which is always). They've got excuse why it's different when they do it too. 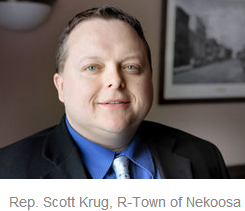 WPR: Nekoosa Republican Rep. Scott Krug would make it mandatory to teach and test financial literacy skills in grades K-12. "You'll end up swimming in credit card debt. You're going to find yourself in that spiral, not being able to get out of it. It's absolutely critical,"

Let's face it, Republicans are chomping at the bit to legislate their own politicized public school curriculum.  Partisan all the way, this is the epitome of big government meddling.


Wisconsin Association of School Boards' Dan Rossmiller said, "It's ironic that the committee is taking up this bill just five days after the governor proclaimed in his veto message that the state budget he signed into law 'increased local control by affirming the authority of school districts to choose their own academic standards.'"

The bill also would apply to the University of Wisconsin System and technical colleges.