Making the rounds in conservative circles is a story filled with a mishmash of statistics that turns reality on its head; Scott Walker is a working class hero?

See for yourself in the short unintentionally humorous excerpt below from the NY Post: 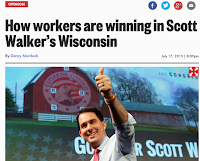 Liberals like Clinton and Trumka have it all wrong.

In all seriousness, reporter Deroy Murdock wrote this:

But my whole reason for posting this exercise in tortured logic was the following worker “win” for...wait for it; women! Thank you Scott Walker:


In terms of “workers’ rights,” Wisconsinites now enjoy the right to work.

This new law recognizes a woman’s right to choose whether or not to join a union. (This statute applies to men, too.) Wisconsinites no longer may be compelled to join unions as a condition of employment. Clinton and Trumka are anti-choice on union membership.

The truth is no one has to join a union.

But even more basic than that is the argument we’re always getting from crazy Republicans, who can’t seem to see the connection; If you don’t like unions, don’t look for a job at a union shop. Look elsewhere, right? Choice, freedom and liberty! It's the same reason Republicans give when a worker doesn’t like the pay, benefits or working conditions provided by their employer. Look elsewhere...you can leave anytime...no ones forcing you to work there.