Walker & GOP still plan to kill Open Records Law!!! But "it would be difficult to revisit this issue in the environment we're in right now."

The frightening realization that Scott Walker and GOP leaders still intend to do away with the open records law is, as State Sen. Jon Erpenbach said "mind-boggling,"

Walker's unapologetic admission that he and Republicans wanted to deep six Wisconsin's open records law seems very odd for a guy hoping to become presidential. Especially after he's told the media that Wisconsin's reforms should be a template for the rest of the nation.  Sen. Scott Fitzgerald thought the changes "made sense." Journal Sentinel:

Gov. Scott Walker acknowledged Tuesday his office helped develop plans to dramatically roll back the state's open records law ... which has since been abandoned.

Walker and his aides had repeatedly evaded saying whether they helped ... "We tried to put something together we thought that made sense," Fitzgerald told them. "But it's not going to be accepted publicly and that's why we're here pulling it back today."

But Fitzgerald went even further down the rabbit hole with the following jaw dropping reason why he thought change was needed. WISC: 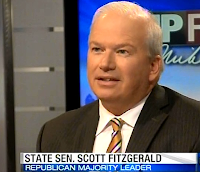 Fitzgerald: "Technology has changed. The way we handle our offices has changed. And if we don't continue to embrace idea that we should be doing something on this. Than I'm not sure where we'll end up on this."

Erpenbach: "The audacity for you to close government down like that is ridiculous...mind-boggling...MIND-BOGGLING! I will defend every single reporters right to sue me."

Just as shocking was Fitzgerald's plans to try again, even after the media, Democrats, Republicans, conservative think tanks and talk show hosts all bashed the idea of a secret unaccountable government. But it's an old law....

Fitzgerald said he hopes to consider changes to the open records law in the future, but that lawmakers can't now because of the public response to the plan the committee passed last week.


"Certainly, it would be difficult to revisit this issue in the environment we're in right now," he said on the Senate floor. "Obviously, it's very hot."

Sen. Jon Erpenbach (D-Middleton) said the plan never should have been advance in the first place.

"This doesn't make you heroes — at all, This vote doesn't take away what happened last Thursday night.