The Scott Walker/Republican open records fiasco wasn't just bizarre and a gift to the Democratic Party, but it was also the playable trump card against what many see as big government authoritarian takeover of Wisconsin. They would be crazy to try this again, right? But it was a natural next step for the super majority party; establishing a secret and unaccountable government. 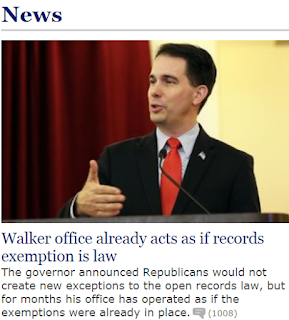 It wasn't a misstep either, since Walker and the legislature are blissfully content to send this to a committee, as if talking it over and changing a few words will make the idea any less outrageous.

But if radio host Mark Belling's message to "Stand with Walker" supporters is any indication, "no damage done" will be the acceptable response.

Republican Rep. Dale Kayenga actually called political star maker Belling, and apologized. And you might like this: Belling blamed all of this on a bumbling inexperienced Republican Party not used to being in complete power:


Belling: "So in the end nothing is going to happen...the Republican leadership deserves some praise for understanding they were doing something unbelievably stupid...One of the ramifications of being in power, and this is admittedly new for Republicans, they haven't had total control of anything prior to the last several years here...in the end the Republican leadership and Governor Walker who did a 180 and backed off something the wanted to do, should be praised for listening...and given the fact that everything is now essentially dropped...there isn't any actual damage done!!!


Not exactly an acceptable rescue attempt. "On Milwaukee's" Jessica McBride was a whole lot less charitable, despite having been a supporter of Act 10, school choice, abortion, and concealed carry. She spewed a slew of questions, good questions that should be answered in detail soon:

The Republicans in the legislature and Gov. Walker should announce, "This is wrong. It will not happen." And that’s what they have not done.

The open records assault accomplished the unthinkable in Walker’s Wisconsin: It united left and right. Who pushed for this? Whose idea was this? And why will no one say?

It’s rather ironic, is it not, that legislators are being so secretive about a measure designed to legalize more secrecy? Is it true, as one Democrat claimed, that Walker or his staff made it clear to the Republicans on the JFC that he would not veto the measures? Walker, when asked this question by the media, did not give a straight answer: "Again, those are all things we'll talk about on Monday. We'll talk about what we're doing going forward." This is mind-boggling in its obfuscation. Every single Republican on the JFC voted for it.

The Wisconsin Center for Investigative Journalism has also noted similarities between Walker’s office and the state Department of Administration citing "deliberative process" arguments when denying recent open records requests … This sets up the possibility that the changes were made to shield Walker from his own bad proposals as his presidential campaign gears up.

Why did the measure push the start date of the changes back to July 1, rather than the day the bill would actually become law? Was the retroactive start date created so the public and media wouldn’t be able to figure out who pushed for this? Why did no one run on this, inform the public of it in advance or solicit public opinion on it in advance of the JFC vote?

Why the sneak attack? It’s becoming a pattern. Republicans surprise the electorate with things no one ran on. How is this not "big government"? How was this a "fiscal matter" that ever belonged in the budget?

By voting to put the deliberative process outside public scrutiny, wasn’t the legislature acknowledging that the deliberative process falls under open records law disclosure right now? Otherwise, why was the vote needed? Since this is being pulled from the budget, Gov. Walker’s administration will promptly release those records and comply with existing open records laws ... right? What the heck were they thinking?

I liked this suggested question in the comments:

Question 12. Who spoke up in May when Walker first claimed the "deliberative" exemption? Was it MacIver, WILL, and Schimel? It was a first for an executive to try it; the courts have struck down school boards and cities who tried that excuse.