Heavily Republican strongholds like Mequon and Waukesha are now feeling the pain of their own party’s gifts to big business, and it’s coming at their own expense. Maybe they just weren’t paying attention when they gleefully voted against those damn Democrats?

Scott Walker signed into law a Republican bill that let wireless providers do whatever they wanted with their cell towers, in the name of free markets, streamlining regulations and smaller government. Suckers...: 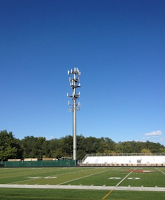 The new regulations require municipalities to rule on a wireless tower permit application within 90 days or the application will be considered approved … local governments may not enact ordinances prohibiting the placement of wireless towers in particular locations, and they may not impose environmental testing and monitoring requirements for radio frequency emissions. Local governments can no longer deny wireless tower permits solely for aesthetic reasons, limit the height of towers to under 200 feet, or require that antennas and structures such as water towers be placed on public property.

Mequon conservatives are  now experiencing for themselves how small government works, and it's not working out like they thought. jsonline:

Cellphone tower plan stirs concern among Mequon property residents: Plans for a 120-foot cellphone tower in Mequon are being opposed by some residents who say it would lower their property values and could be dangerous, even if it boosts wireless coverage in the area ... under state and federal laws they couldn't prevent SBA from signing a deal with a private landowner.

"There's really no stopping it," said Ald. John Leszczynski. "They're going to put up a tower where it needs to go up. That's the bottom line."

Waukesha...pretty much the same thing...


Patch: A proposed cell phone tower that could bring between $30,000 and $70,000 annual revenues to the School District of Waukesha has angered area residents because it would be built near the playground at Bethesda Elementary School, WISN 12 News is reporting. Residents at a meeting spoke out against the 100-foot-tall AT&T cell tower because of health concerns, according to WISN 12 News.

Or this story reported back in October of 2013:


WISC: A lawsuit filed by 21 property owners likely won’t delay the construction of a cell tower at the Sauk Prairie High School athletic field … an attorney for Verizon has notified (the citizens) the company intends to move forward with the tower’s construction despite the lawsuit. “We have no further information at this time,” Verizon spokeswoman Andrea Meyer said when asked about the company’s plans.

Can you imagine your government saying "we have no further information," take a hike? What changed recently without any fanfare at all (except here at Democurmudgeon)?


The village of Prairie du Sac Plan Commission’s said their hands were tied by a new law signed by Gov. Scott Walker this summer that limits municipalities’ authority over the placement of cell phone towers.