Scott Walker's Spin on the 4th of July...he's using it to divide us!!!

It was always one of Scott Walker's most ridiculous lines ever. Conflating tax day (with representation), with a day we declared our independence from taxation without representation, was always crazy.

But now that Walker's a top tier presidential candidate, the nation is now discovery just how ideologically driven and incompetent this guy really is. Seriously, he set out to divide (and conquer) us on our nation's holiday, the 4th of July? He really did.

Let us rejoice in the glorious reaction to Scott Walker's nasty celebratory tweet against our government. Americans are taking notice, and are a bit more critical than our own state media: 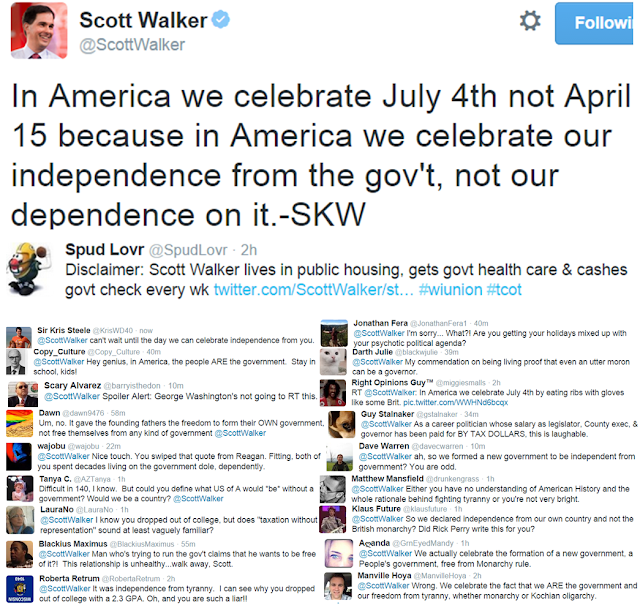 Walker's divisive down-the-rabbit-hole cluelessness about our own countries history isn't an isolated moment in his governorship.

The following video clip exemplifies Walker's style of an authoritarian government; ignoring and trampling over the minority Democratic Party. Republicans didn't even want to give some of them a chance to vote against Act 10 (Walker's union busting scheme). Thank you State Rep. Gordon Hintz for the passionate embrace of representative government, now under attack.

One of the final nails in the democratic coffin was the GOP's recent attempt to do away with the open records law, and I might add, the public's right to know. Every Republican voted for this and every Democrat didn't:


The proposal blocks the public from reviewing nearly all records created by lawmakers, state and local officials or their aides, including electronic communications and the drafting files of legislation.

The blowback was unprecedented, forcing all the Republicans and Scott Walker...to become HEROES? Caught destroying our representative democracy, they relented. Here's the WSJ's headline:

Never forget: THEY ALL VOTED TO DO AWAY WITH THE OPEN RECORDS LAW! 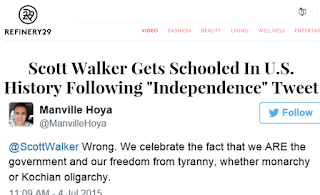 Though the tweet still stands, some staffers must have decided to clarify things a bit to be less anarchic, more Republican: "The founders did not declare their independence from one big government only to create another."