Family Day at the Waterpark and Walker Gun Signing!!! 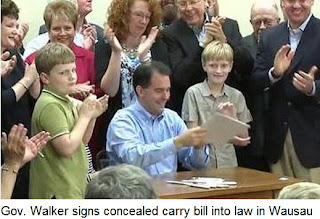 Nothing safer for kids than a nicely concealed loaded gun in the possession of a total stranger at a family water park.

It was either an attempted "in your face" slap at Wisconsinites who are opposed to guns, or a total lapse of judgement to see Gov. Scott Walker sign the concealed carry law at a family water park/hotel. Is he out of his friggin' mind?

Even more jaw droppingly bizarre was the decision to flank Walker with two kids. Kids? Walker even shook the hand of one of them. What in gods name is this sociopath doing?

Interesting to note; the reporter never mentioned the name of the business, and neither did the jsonline:


"Signing the bill in Rothschild, near Wausau..."