Hopper/Walker fundraiser for recall gets more heat from protesters.

The state of unrest never takes a break in Wisconsin. While the Doyle administration never saw the same unrest and protester rallies at his public appearances, we're now being led to believe the furor surrounding Gov. Walker is just the normal way of doing business and no big deal.

Wrong! Our droopy eyed sociopath met up with his not so loyal followers again: 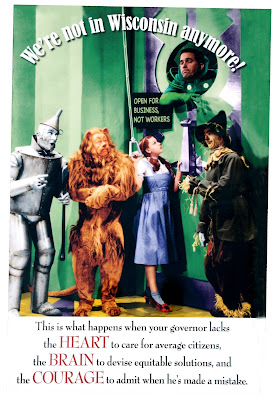 We Are Wisconsin: On Wednesday, more than 200 parents, teachers, public employees and leaders in the Fond du Lac area stood in 95-plus degree heat to “welcome” Gov. Scott Walker with a protest during his visit to help his friend and rubberstamp vote, Randy Hopper. Walker was in town to raise campaign cash for Hopper’s flailing campaign, as he desperately attempts to hang onto a loyal vote for his extreme agenda in Madison.

The fundraiser was at a posh and private country club that tried to keep people away, but that didn’t deter the 200-plus in attendance from making sure both Walker and Hopper knew their extreme agenda and their attacks on middle class families weren’t welcome in Fond du Lac. Braving the heat, standing outside at the entrance, the crowd made sure they were seen and heard by Walker as he drove by into the private, high dollar event.