Walker Denies Tying Wisconsin Job Numbers to National Job Number! "Though, it is an interesting parallel." 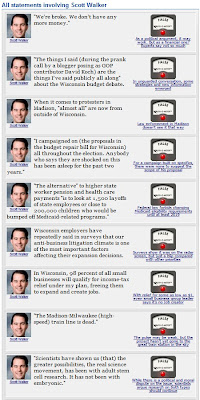 Oops, did we say that?

It looks like another case of Scott Walker getting as much mileage out of a complete lie, and then denying he and his fellow Republicans ever meant to deceive anyone. For example:

Wausau Daily Herald: On Tuesday, Walker said it was never his intention to draw a direct line between the Wisconsin total and the national total.

"We made it very clear at our announcement that (our number) was not half of all the jobs out there, though it is an interesting parallel," he said.

Huh? Gee, what an "interesting (but completely unintentional) parallel," eh Scott Walker? While adding jobs is great news, the fact that many can be attributed to the efforts of the previous administration and some are low wage seasonal employees, that still doesn't take away from the message reported in every daily newspaper and praised by every conservative talk show host in the state:

Assembly Majority Leader Rep. Scott Suder, R-Abbotsford, also weighed in, saying "Accounting for more than half of the nationwide gain in June employment is a remarkable feat."

Hey, I wonder how anybody got the wrong idea about the job numbers?


The state Republican Party issued a news release with this statement: "Today, we learned that over 50 percent of U.S. job growth in June came from our state."

Three days later, U.S. Rep. Jim Sensenbrenner (R-Wis.) said: "The labor (department) report that came out last week had 18,000 jobs created in the country. But half of them were in Wisconsin, so we must be doing something right."

Variations of the statement were made by others, including the conservative MacIver Institute, Sen. Alberta Darling (R-River Hills), and state Reps. Michelle Litjens (R-Vinland), Scott Suder (R-Abbotsford) and Joan Ballweg (R-Markesan).