Get Ready for It: Families in Poverty Living Large, What’s the Problem?

While conservatives push to eliminate the minimum wages and most benefits, they’re also busy changing the public perception of poverty in America. Not surprisingly, they’ve concluded; poor people have it made.

The Heritage Foundation: If poverty means lacking nutritious food, adequate warm housing, and clothing for a family, relatively few of the more than 30 million people identified as being “in poverty” by the Census Bureau could be characterized as poor. The average poor person, as defined by the government, has a living standard far higher than the public imagines.

But do the poor live like millionaires? That’s one perception conservatives are pushing into the public’s subconscious as a way to finally remove their outrage over poverty in America.

As scholar James Q. Wilson has stated, “The poorest Americans today live a better life than all but the richest persons a hundred years ago.”

So true, so true. Look at all the things we have now that only millionaires would have had in 1905: 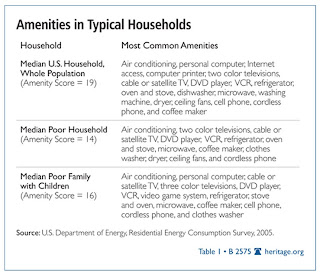 In 2005, the typical household defined as poor by the government had a car and air conditioning. For entertainment, the household had two color televisions, cable or satellite TV, a DVD player, and a VCR. If there were children, especially boys, in the home, the family had a game system, such as an Xbox or a PlayStation. In the kitchen, the household had a refrigerator, an oven and stove, and a microwave. Other household conveniences included a clothes washer, clothes dryer, ceiling fans, a cordless phone, and a coffee maker … the typical poor family was not overcrowded and was in good repair. In fact, the typical poor American had more living space than the average European. The typical poor American family was also able to obtain medical care when needed. By its own report, the typical family was not hungry and had sufficient funds during the past year to meet all essential needs.

So what’s to complain about? Ignoring the massive income disparity, the poor have it made. The following are “positioning” statements that portray poverty as no big deal.

In reality, the living conditions of poor Americans have shown significant improvement over time … exaggeration has the potential to promote a substantial misallocation of limited resources for a government that is facing massive future deficits. Each year the U.S. Census Bureau issues a report claiming that over 35 million Americans live in poverty.  In fact, without a detailed description of living conditions, public discussions of poverty are meaningless.

All this talk of poverty is meaningless, isn’t it? After all, poverty counts don’t consider safety net programs that boost the poor’s overall wealth.

For example, there are over 70 means-tested welfare programs that provide cash, food, housing, medical care, and social services to poor and low-income persons. The bottom line is that the economic resources available to poor persons are vastly greater than the Census claims. The assertions that poverty is widespread … provide justification for policies to greatly expand the welfare state and further “spread the wealth.” Poor families clearly struggle to make ends meet, but in most cases, they are struggling to pay for air conditioning and cable TV while putting food on the table.

Sounds to me like someone needs to sacrifice a few "luxuries." How do conservatives sleep at night? Very well, thank you.

Labels: Poverty
Email ThisBlogThis!Share to TwitterShare to FacebookShare to Pinterest