In the unlikely event the nation defaults, we’ll know who to blame.

As evidence to be used later on if the debt ceiling isn’t raised, here’s how we can decide who’s really to blame: 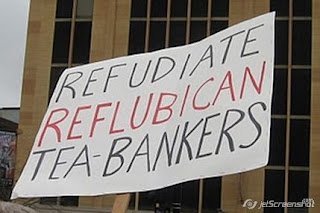 Washington Post: Debt ceiling Armageddon: A new Pew poll finds that a majority of Republicans voters, and an even larger majority of Tea Party supporters, simply don’t think failing to raise the debt ceiling will lead to a crisis:

By a 53% to 30% margin, most Republicans say that it will not be a major problem if the debt ceiling is not raised by Aug. 2. The balance of opinion is the reverse among Democrats: 56% say it is absolutely essential to meet that deadline to avoid an economic crisis, 28% say it is not.