You’ve heard it all before. Sarah Palin and Michele Bachmann love to play the victim of the ruthless, mean spirited, hateful, venomous, character assassination from politicians and pundits.
After all, they’re strong conservative outspoken, take charge women, who won’t back down or allow their gender to be an issue. And when they’re not defending themselves, their fans are:

Salon: They hate the average person, who is not an elitist snob, or is not a copy of their leftist agenda. They hate the fact [that Palin] is a well spoken … They make up lies, just to avoid the truth. The lies and misinformation they spread is pure HATE, they fear her, she is capable to put these liars in their place."

Politico: Florida GOP Congressman Allen West this afternoon dispatched a scathing personal email to Democratic National Committee Chairwoman Debbie Wasserman Schultz, (who) provoked his tirade with remarks after he left the House floor today, in which she responded "The gentleman from Florida. who represents thousands of Medicare beneficiaries, as do I, is supportive of this plan that would increase costs for Medicare beneficiaries, unbelievable from a Member from South Florida," Wasserman Schultz said, saying the legislation "slashes Medicaid and critical investments essential to winning the future in favor of protecting tax breaks for Big Oil, millionaires, and companies who ship American jobs overseas."

Pretty standard stuff? Not to a mad man. 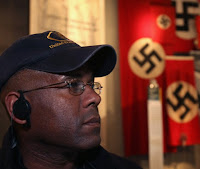 Her criticism provoked a furious response. West on the email:
Subject: Unprofessional and Inappropriate Sophomoric Behavior from Wasserman-Schultz

Look, Debbie … Let me make myself perfectly clear, you want a personal fight, I am happy to oblige. You are the most vile, unprofessional ,and despicable member of the US House of Representatives. If you have something to say to me, stop being a coward and say it to my face, otherwise, shut the heck up. I am bringing your actions today to our Majority Leader and Majority Whip and from this time forward, understand that I shall defend myself forthright against your heinous characterless behavior … You have proven repeatedly that you are not a Lady, therefore, shall not be afforded due respect from me!

All I can say is… "You hate the average person, who is not an elitist snob, or is not a copy of your rightist agenda. You hate the fact [that Wasserman-Schultz] is a well spoken … You make up lies, just to avoid the truth. The lies and misinformation you spread is pure HATE, because they fear her, she is capable to put these liars in their place."
A little reminder on West: West resigned from the army in 2004 after being found guilty of assaulting an Iraqi police officer suspected of having information about planned attacks on American forces.
Posted by John Peterson, Democurmudgeon at 7/20/2011 01:34:00 AM