Trump's got a big problem when it comes to his promise to lower the cost of health care. Trump supporters actually think he's going to lower prices with better health care: 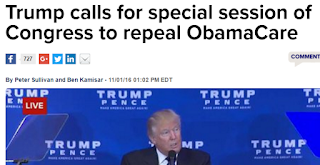 Trump supporters talked about that promise. Here's just an example:

Lowering the price can't be done unless we go to a single payer system. But even then, while the cost generally would decrease by removing the middleman insurers, we can only slow the rate of medical increases.

I dare the Trump administration to not just match the trend lines in the graphs below showing a decline in the uninsured, but show us a reduction in the actual cost of insurance. He won't be able to do it, and Americans will soon realize they were duped by our con man president. 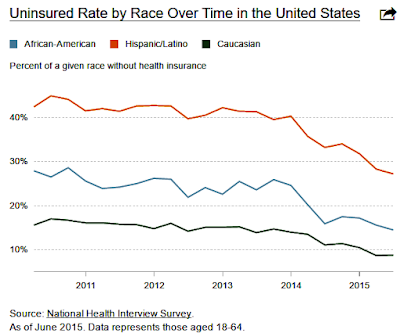 Trump thinks Health Savings Accounts (HSA) will lower premiums. But they're high deductible insurance policies, which no one can afford, and everyone hates so much on the exchanges. Check out the difference between the deductibles on the ObamaCare exchanges and "off exchange" private insurance policies. It runs counter to Trump's promise: 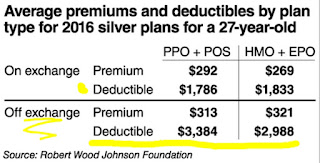 Remember these graphs and what they represent. Once the Affordable Care Act is repealed, it's never coming back, but premium rates and uninsured Americans will skyrocket. On a human level, preventable deaths with increase dramatically and health based bankruptcy's will be solidly at the top of the list, threatening the solvency of middle-class Americans. Can they take another hit? 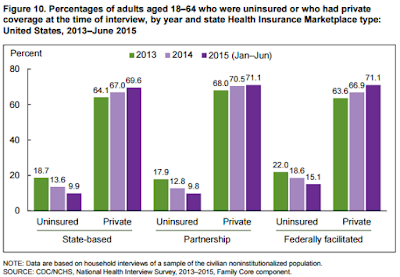 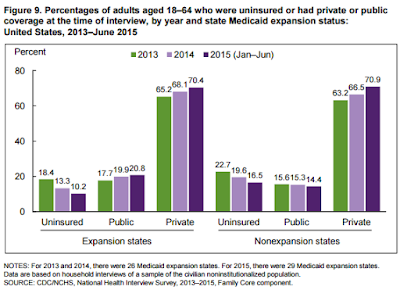 Note: Paul Ryan's bogus "patient centered" plan, controlled by insurance companies, is based on people buying "only what they can afford," basically à la carte. In insurance lingo, that's called a junk policy. My conservative friend in Milwaukee is sold on this idea, arguing since he won't have to pay for someone else's vasectomy or pregnancy, he will save money. Care to make a bet insurance companies won't allow their bottom lines to take a hit? It also ignores the fact that no matter what's covered in the junk policy, the cost of treatment isn't any cheaper, so don't expect to save any money.

Example: Before the ACA, my insurance plan had a drug "option," which really wasn't an option at all. I never used it and it cost $500 a year. When I tried to remove it, I was told I could never add it back into the policy. That's choice in the private sector? So this love of the old way of getting insurance is a mystery to me.
Posted by John Peterson, Democurmudgeon at 11/10/2016 01:20:00 PM