Scott Walker to Trump, get rid of Filibuster!

Former presidential candidate Scott "Wreak Havoc" Walker has a message for Trumpian Republicans: Throw out the senate filibuster.  Hey, it's not in the Constitution, and Republicans are now in charge. Here's why our single party nationalist rightwing authoritarian governor is wrong: 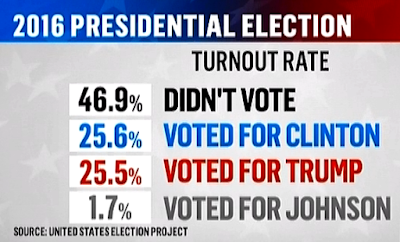 51.1% of Americans voted, period, with 25.5% for Trump. Not exactly "half the country," like we're being told by our Republican overlords now. A lot of Americans may not have voted, but to tell them they don't count, that they no longer have a voice as citizens, or they must now be punished and suffer the consequences, is beyond troubling.

After the election we heard voters say they wanted to "take a chance," or at least wreak havoc and turn things upside down in Washington. But would many of them be willing to do something that radical in their own personal life, to their own family? Here's the logic I saw over and over justifying a vote for Trump:

Listen to the audio of our sociopathic governor on the Charlie Sykes radio show justifying the end of the filibuster:


Sykes inquired if Walker wanted to get rid of the filibuster, which would allow Republicans to pass bills with a simply majority in the Senate.


"Yeah, I've said it last year. To me, I think that would really upset the electorate of the people who not only elected Donald Trump and Mike Pence but the people who elected Ron here and elected other members of the House and the Senate. You cannot use, they cannot use inside-the-ballpark Washington procedural reason to justify why things don't happen. They've got to get things done and as I said frequently here in this state and continue to, the best time to do them is early."

And with no filibuster to stop Republicans from passing their entire agenda, the letter to the editor idea below would make a lot of sense:


The GOP seems to think it has all the answers to all of the problems facing our great country. So my suggestion is that, for every measure brought to a vote in the House of Representatives and the Senate, all Democrats vote "present. "Gridlock would thus be prevented, and Republicans can pass all bills and present them to the Republican president for his immediate signature. Then we shall see for sure if the Republicans indeed have all the answers.