This whole health care debate about repealing the Affordable Care Act for private free market competition is a ruse to distract from the anti-competitive multi-layered problems and abuses private insurers and medical providers are using right now. 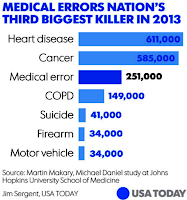 It’s an early look at what will happen if Republicans turn health care into an unregulated private sector profit making machine. And since most people have employer provided health care, they don’t know any of this is happening.

Keep in mind, if medical errors were a disease, it would be the third major cause of death in the US..

Under that backdrop, check out what one market dominant hospital system is doing to not just shield themselves from lawsuits, but prevent businesses from negotiating away increased premiums. This is where hospital consolidation nationwide will take us. WPR: 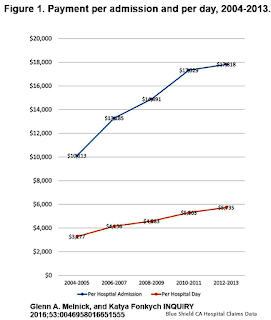 San Francisco Bay Area companies say Sutter Health, the largest medical system in Northern California, is strong-arming them into a contract that would help the hospital system secure its power over prices and potentially raise the cost of medical care for their employees in the future. Dozens of companies have received a letter, via their insurance administrators, asking them to waive their rights to sue Sutter. If they don't, a fact sheet says, the companies' employees who get care through Sutter's network of hospitals, doctors and medical services will no longer have access to discounted in-network prices.

"In both choices, Castlight and our employees lose," says Jennifer Chaloemtiarana, general counsel for Castlight Health, a tech company in San Francisco.

As an employer that pays its employees' medical claims, Castlight doesn't like the idea that it will never be able to challenge Sutter over its prices in open court … waiving that right would only help strengthen the power of Sutter's "already dominant" provider network.

Economists have long argued that Sutter uses this power to charge more for its services. Sutter's hospital prices are about 25 percent higher than other hospitals around the state, according to a recent study from the University of Southern California. Having a very strong, dominant provider system will reduce choice.

Wasn't "choice" the whole reason why we have to go to a privatized health care system? Guess that was wrong.

We’re Right, Everybody Else is Wrong: It should come as no big surprise that Sutter Health arrogantly believes their critics are wrong, and all that fact-based research is biased:

"Recent academic studies have been one-sided and misrepresent the competitive environment of Northern California," said Bill Gleeson, vice president of communications for Sutter, adding that the studies "unjustly inflate the so-called market share of Sutter. There's competition all around." Gleeson says companies "can't accept deep discounts and make up their own rules."

Just another ugly wrinkle in the private insurance market that will only get worse if politicians let "free market" principles roll over the public welfare for money.
Posted by John Peterson, Democurmudgeon at 11/04/2016 10:33:00 AM