Wind energy is a great rural job creator across the country, but not in Walker's Wisconsin. I'm just hoping a few Democrats will read this and decide to ride the wind wave into rural voter support. Unlike most GOP rhetoric, this is a real issue they can get behind.

Hate to bring it up, but it looks like Minnesota is at it again. Midwest Energy News:

A new report says proposed renewable energy investments in Minnesota could create
more than 5,000 construction jobs and $7 billion in economic activity, largely in conservative, rural parts of the state.

“We are clearly seeing a bigger (political) divide in Minnesota and clean energy is a way to bridge that divide,” said Chris Kunkle, Wind on the Wires regional policy manager for Minnesota. “You’re talking about advancing policies and investments from the Twin Cities that benefit rural Minnesota and create new jobs and tax revenue. These are in really red areas, this is rural America."

And just like Wisconsin, rural voters in Minnesota "wanted to try something different:"

You'd never know it by anything Republicans say in Wisconsin, but wind technology has dramatically changed:

The reason for newly proposed projects in those counties stems from improved turbine technology that allows for greater production out of less wind, policy manager Chris Kunkle said.

The report shows that more than 3,300 megawatts (MW) of wind projects could create 12,573 jobs, including those in construction, while paying property owners $9 million annually in lease payments and local governments in excess of $9 million in taxes.

But if Republicans finally get their way, failed bills from the past will pass and dramatically change everything, at their own peril:

Michael Webber, deputy director of the Energy Institute at the University of Texas, believes perils exist for any move by Trump to push for the removal of tax credits.
“All those rural districts in America’s wind corridor might not be thrilled if their preferred candidate seeks to undermine one of their most important sources of economic growth,” he wrote recently in the New York Times. 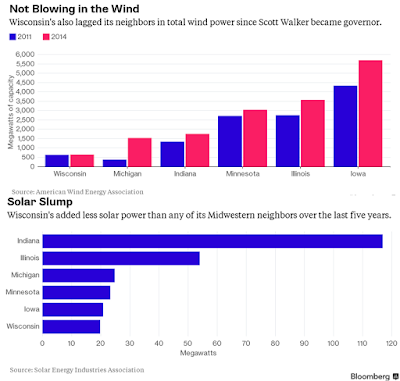