UPDATE: After Trump won the election, this appeared in The Guardian:

Republican voters are easily swayed by conspiracy theories, like the emails, Benghazi, the Clinton Foundation...but Democratic voters have never sucked into that fear mongering political tactic. 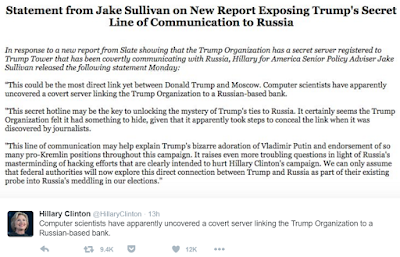 The Hill: According to a new report from Slate, a computer scientist tracking malware and going by the name “Tea Leaves” has discovered a pattern of conversation that appears to tie a server registered to the Donald Trump organization to two Russian servers registered to something called Alfa Bank. Further research of the pattern of conversations revealed they would occur during office hours in both New York and Moscow

Computer scientists began looking into GOP presidential nominee Donald Trump’s servers in the wake of the hack into the Democratic National Committee (DNC) that U.S. intelligence has blamed on Russian actors. “We wanted to help defend both campaigns, because we wanted to preserve the integrity of the election,” one of the unnamed academics involved said. 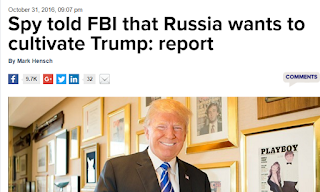 Manafort’s foreign business and political dealings … reports of his involvement with a pro-Russian political party in Ukraine.

The group forwarded their findings to computer science expert Paul Vixie, who concluded, “The parties were communicating in a secretive fashion. The operative word is secretive. This is more akin to what criminal syndicates do if they are putting together a project” … the Trump and Alfa servers had something like a digital hotline connecting the two and hiding their existence.

Clinton’s campaign senior policy adviser Jake Sullivan said in a statement, "This line of communication may help explain Trump's bizarre adoration of Vladimir Putin and endorsement of so many pro-Kremlin positions throughout this campaign. It raises even more troubling questions in light of Russia's masterminding of hacking efforts that are clearly intended to hurt Hillary Clinton's campaign. We can only assume that federal authorities will now explore this direct connection between Trump and Russia as part of their existing probe into Russia's meddling in our elections."

Trump's not so secret Russian Partner Emerged, but no one cared: After confirming Russian involvement in the hacked DNC and Clinton campaign emails, it was a little unsettling to see Russian Nationalist Vladimir Zhirinovsky's video below touting a Trump presidency and threatening nuclear war if Clinton is elected.

And Trump's fascination with dictatorial strong men is just as crazy....

Trump's now famous "puppet" tantrum obscured the even more troubling back hand he gave to the 17 intelligence agencies that warned of Russia's involvement. US Navy Intelligence officer Malcolm Nance detailed Trump's connection, saying Russia would call a guy like Trump a useful idiot:

This Russian connection won't go anywhere for two reasons; it's too new - nothing like the familiar email fear fantasy; and the media that has never held Trump's feet to the fire for anything. If Clinton committed any of the Trump missteps, this would have been all over. If not for the fire breathing mob of Trump supporters and the media attempts to create a "false equivalence," this wouldn't even be close. Media Matters explains this false equivalence below: