Entitled Trump has Twitter Tantrum: Tries to Discredit his Loss of Popular Vote to Clinton.

Narcissism is a disorder that seems to be consuming every waking moment of Trump's life.

He can't and won't lose, even if he does. I'm still trying to figure this out; if Trump had lost, that would prove the election was rigged, but if he won...it wasn't rigged. Then again, if Hillary wins the popular vote...it's rigged again, even though Trump won. Throw in Green Party candidate Jill Stein and a recount, and Trump's legitimacy fades and he loses the "mandate." Not going to happen. 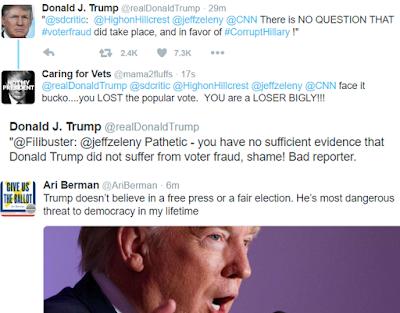 There is a slim hope the electoral college could stop Trump cold. The Guardian:


Some legal experts argue that the electoral college cannot approve a candidate like Trump, who does not fulfil the basic legal requirements to be president.

Harvard constitutional law professor Laurence Tribe said in an email that the “electors who are to cast their votes for president on 19 December not as automatons but in light of constitutional constraints and principles cannot in good conscience vote for Donald Trump as president of the United States unless he fully divests himself of economic interests dependent on the fortunes, for good or ill, of the private Trump empire”.

That view is not restricted to academics and Democrats. Richard Painter, George W Bush’s chief ethics counsel, agrees that without a major reconfiguration of the Trump Organization, the president-elect is heading for a constitutional collision with the electoral college.

“The important thing for the electoral college is to ensure that he technically complies with the constitution,” Painter told the Observer. “This is just as important as the birth certificate. He should not be currently on the payroll of foreign governments.

“So he’ll have to provide assurance to the electoral college that he’s not himself going to be getting money from foreign governments that would violate the emoluments clause.”

Eisen and Painter called on the Trump transition team to take urgent steps to address the problem, before it triggers a constitutional crisis. They recommended he sell all his business holdings and put the proceeds in a blind trust, the composition of which would remain unknown to him, as his predecessors have done for the past four decades. Painter offered his advice to the Trump circle as a fellow Republican, but has not received any response.

It's wonderfully ironic that Trump ran on calling Hillary crooked for the appearance of political influence from Clinton Foundation donors, when in fact, that's exactly what he was planning to do all along. The only difference? You can trust a Republicans:

“His view is that the voters know about this and and they are OK with it,” said Robert Weissman, president of the Public Citizen watchdog group.

“But it is absolutely contradictory to his core message he was going to sweep away the corruption in Washington and all the deal-making.”