Fake news is getting a lot headlines lately, because it sucks. I've been thrown off a few times only to find out the stories came from political humorists and web sites.

But one guy takes the cake. Heard the one about paid protesters at Trump rallies? This guy made that up and much, much more: 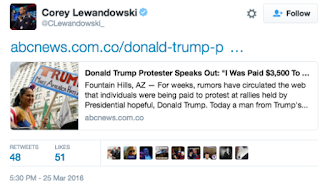 WaPo Reporter: "Why did something like your story about Obama invalidating the election results (almost 250,000 Facebook shares, as of this writing) go so viral?

Paul Horner: "Honestly, people are definitely dumber. They just keep passing stuff around. Nobody fact-checks anything anymore — I mean, that’s how Trump got elected. He just said whatever he wanted, and people believed everything, and when the things he said turned out not to be true, people didn’t care because they’d already accepted it. It’s real scary. I’ve never seen anything like it.

I think Trump is in the White House because of me. His followers don’t fact-check anything — they’ll post everything, believe anything. His campaign manager posted my story about a protester getting paid $3,500 as fact. Like, I made that up. I posted a fake ad on Craigslist."

Reporter: "Why? I mean — why would you even write that?"

Paul Horner: "Just ’cause his supporters were under the belief that people were getting paid to protest at their rallies, and that’s just insane. I’ve gone to Trump protests — trust me, no one needs to get paid to protest Trump. I just wanted to make fun of that insane belief, but it took off. They actually believed it.

I thought they’d fact-check it, and it’d make them look worse. I mean that’s how this always works: Someone posts something I write, then they find out it’s false, then they look like idiots. But Trump supporters — they just keep running with it! They never fact-check anything! Now he’s in the White House. Looking back, instead of hurting the campaign, I think I helped it. And that feels [bad].

Reporter: "Why didn’t you stop? Why keep writing?"

Paul Horner: "I didn’t think it was possible for him to get elected president. I thought I was messing with the campaign, maybe I wasn’t messing them up as much as I wanted — but I never thought he’d actually get elected. I didn’t even think about it. In hindsight, everyone should’ve seen this coming — everyone assumed Hillary [Clinton] would just get in. But she didn’t, and Trump is president."