Republicans talk Sedition while voters describe Trump as "strong," "straight forward," "savage," "he believes what he says is real" when he's wrong!!!

It's frightening to think the US could be ruled by the paranoid masses of disenfranchised voters in rural and suburban areas who continue to get the short end of the stick by their own Republican politicians. Their resentment has all but blinded them to the hard cold facts that conservative small government policies have disenfranchised them, ignored them, and made them unimportant.

In fact, the politics of resentment is proof Republicans haven't done anything to help their own rural constituents like urban Democratic politicians have. So instead of blaming their own Republican representatives for short changing and ignoring their concerns, rural and suburban voters were egged on by their elected officials to blame the Democrats for actually serving their big city constituents.

Scapegoating is the rule now under Trump. Win or lose, Trump has made anger and resentment a battle cry for sedition. Yes, sedition. Making that case was Thom Hartmann in this editorial:

Lately conservatives haven't even bothered to sound like they respect the will of the people. A growing number of Republicans now say if the next president is a Democrat - AKA Hillary Clinton - these Republicans say they're not going to her let her put anyone on the Supreme Court.

John McCain and Ted Cruz have said as much in recent in recent weeks. Republicans have now moved from obstructionism to outright sedition.

What they're doing now with the Supreme Court is insurgency by other means - it's political terrorism - and it's yet another example of how their party has moved outside the mainstream of American politics into the fantasy-land of reaction ... it's just one way that they're laying siege to our court system - and our democracy.

Check out the amazing crowd comments below, from those who admire Trump for being wrong sometimes but firmly believing in his wrongness, it'll blow your mind. It's a pass Democrats will never enjoy:

I think the comments below, from the article "9 Republican Women Attempt to Explain Why They (Still) Support Trump," says it all. Alternet: 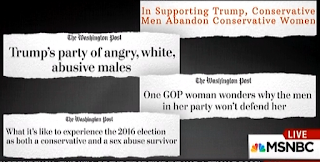 The most shocking statement came from Jane Biddick, who has supported Trump since the primary:


"I heard that he said something about groping women, and I’m thinking, Okay, No. 1, I think that’d be great. I like getting groped! I’m heterosexual. I’m a woman, and when a guy gropes me, I get groping on them! I grope them back. Groping is a healthy thing to do. When you’re heterosexual, you grope, okay? It’s a good thing. Try it. I wonder if Nixon groped Pat."

Jane Biddick followed up her support for groping and being groped by adding she hadn't...

"...even gotten on to see exactly what Trump said, because I think that’s stupid. Unless you want to write Jesus Christ in as your vote, you might as well forget it. Since December, I’ve done very little reading. I’ve heard little snippets here and there on the radio, and I don’t watch TV. I’m just going on what I have at the gut. If Trump really did something that made me feel like he was compromising what I thought was good for the country, I’d get right on and I’d start reading. But all I hear is people are saying he likes to grope women. I’m sorry, that just hasn’t given me any doubt about my vote."

Merchon Andersen is also sticking by Trump "We have become so wussified. Pretty soon, saying hello to someone is going to be considered harassment."

Allison Doyle also seems to have turned a blind eye to the unpleasant Access Hollywood video, saying, "I haven’t listened to the recording of what he said in 2005, because I feel like it’s so irrelevant. It was 11 years ago. We’re not voting for someone based on their character." She went on to criticize Bill Clinton as "scum," though he is not running for president this election, and that is of course a judgment on his characer. She didn't mention Melania Trump's response to her husband's "locker-room talk," but instead said, "I’ve never heard about Trump cheating. I know he’s had multiple marriages—which, in today’s society, who doesn’t?"