Kapanke favors ending the federal ACA. Even before the recent announcement ACA premiums were going up, he didn't believe the program worked.


"We need to go back to where Wisconsin was prior to Obamacare where we did have 90-plus percent of our people covered with some kind of health care insurance."

That was deceptive and wrong.

A Kaiser Family Foundation report suggests 93 percent of the state's residents were insured through either employer-based insurance or government programs in 2015, up from 91 percent in 2013 before the ACA began.

Let's Get It Straight: I'm tired of hearing Republicans brag about how Wisconsin was a leader in insurance coverage. The reason we covered so many Wisconsinites? We opened BadgerCare up to those making up to 200% of the federal poverty level, which Scott Walker and his band of plundering Republican pirates threw overboard immediately:

And that's why back in 2013, Wisconsin's insured fell to just 91%. Now it's at 93%, thanks to enrollment in the ACA's Marketplace. But those stuck between 100%-200% are still having problems getting health care on their tight budgets: 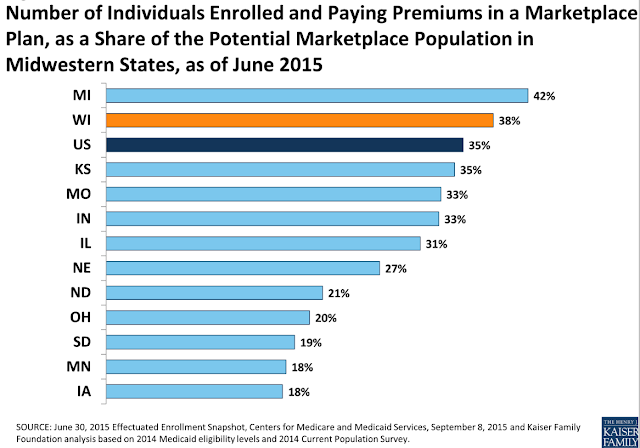 Oddly, this is the Republican mantra now, repeated below by Dumb Ron Johnson. Russ Feingold of course had to explain why that was a bad idea to the drooling GOP mob hoping to lose their own health care someday: