New Meme: Because Democrats not perfect, and will always be under investigation by Republicans, they shouldn't run for office.

We already know Republican low information voters are easily manipulated, but will they buy into the idea that phony and constant investigations into all things Democratic precludes liberals from ever running for office?

Yes, without a doubt. Our right wing authoritarian anti-government, anti-two party system overlords think threats and vilification will do the trick. Only if Democrats let them.

The best description of this upside down thinking came from Judge Jeanine Pirro. Remember, the relentless Republican attack of overblown suspicions based on "appearance" based guilt and phony outrage automatically disqualifies Democrats from running for office:


Pirro laid out the case for why Democratic presidential candidate Hillary Clinton cannot be allowed to move back into the White House.


"We cannot have a country led by a president subject to ongoing criminal investigations, potential indictments and never-ending hearings. We cannot have a president under that level of scrutiny, that inevitably leads to even more questions and more investigations," she said. "Irrespective of what happens to her-- whether she's indicted or even guilty-- it doesn't matter. Her guilt is a moot point. She cannot take the oval office."

Thankfully Pirro put the world on alert too. A Clinton presidency should not be taken seriously, and is illegitimate, like Obama. This theme is getting old but works with the deplorables. And the anger about the Clinton's making lots of money...how anti-free market is that?

"How do you think the world is going to look at the United States when a woman under federal criminal investigation, who's lied repeatedly to the American people, is elected? Do you think they'll take her at her word? How many countries already own her through the Clinton family 'charitable' foundation-- which was used to raise a minimum of $100 million for her husband. How many countries like Morocco own her because they gave $12 million for five minutes with Bill Clinton? Just think: We can even have our own world joke.

It's time to vote for the person who believes in the Constitution--the only one who will bring changes--the one who doesn't give a darn about political correctness-- the one who knows how to create jobs, and wants to make America great again." 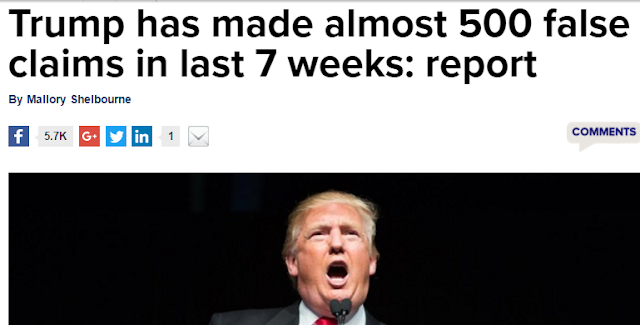 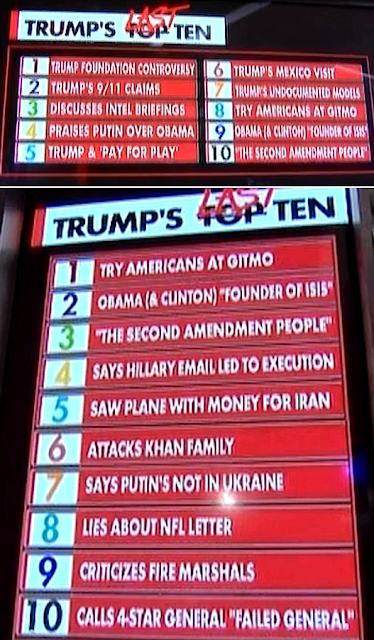