Trump Promises No Premium Increases Under His Health Care Plan!!!

If Trump did manage to win, I want everyone to remember this flat out promise from Trump on doing away with premium increases:

“In the future if I’m president, there won’t be ObamaCare so you won’t have to worry about it,” Trump said of the premium increases. 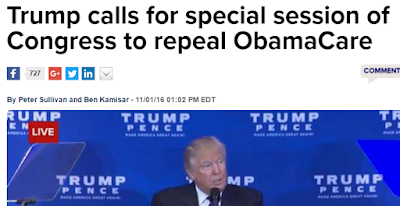 Got that? Just so we’re clear, Trump said we won’t have to worry about premium increases. And just like Obama’s promise that people could keep their old plans, we'll have to scream bloody murder if Trump’s promise fails.

Trump wants to go back to the old system, just like Paul Ryan and Dumb Ron Johnson, who long for the good old days of  20% to 50% increases a year.

Believe it or not, here's Ron Johnson actually saying how he'd go back, an admission few Republicans would dare say in public. His debate opponent Russ Feingold ran with it:

Trump’s plan is like the GOP plan pushed by Paul Ryan. And guess what, according to analysts, it stinks. You were warned:

An analysis from the Committee for a Responsible Federal Budget found that 21 million people would lose their health insurance under Trump’s plan. Only about 1 million people would gain coverage under his replacement, the study found … longtime Republican ideas ... allowing insurance to be sold across state lines, encouraging health savings accounts and making premiums tax deductible.

“In the future if I’m president, there won’t be ObamaCare so you won’t have to worry about it,” Trump said of the premium increases.