Trump University would be laughable if it wasn't for the fact that so many students lost so much money in the fraudulent scheme. Here's a brief look at what happened. NY Times:

Trump University, which operated from 2004 to 2010, included free introductory seminars across the country, focusing largely on real estate investing and learning Mr. Trump’s secrets. Students then could purchase more expensive packages costing up to $35,000 ... some former Trump University managers had given testimony about it unscrupulous and exploitative business practices. One sales executive testified that the operation was, “a façade, a total lie.” Another manager called it a “fraudulent scheme.”

Other records showed how Mr. Trump had overstated the depth of his involvement in the programs. Despite claims that Mr. Trump had hand picked instructors, he acknowledged in testimony that he had not.

He even gave the Florida AG campaign money, which coincidentally, resulted in the state canceling its investigation into Trump's fake university. Seriously, people wanted this guy to be president?

All I can say to our desperate and faithful Trumpian mob, "that's our president." Here's Lawrence O'Donnell and Rich Wilson: 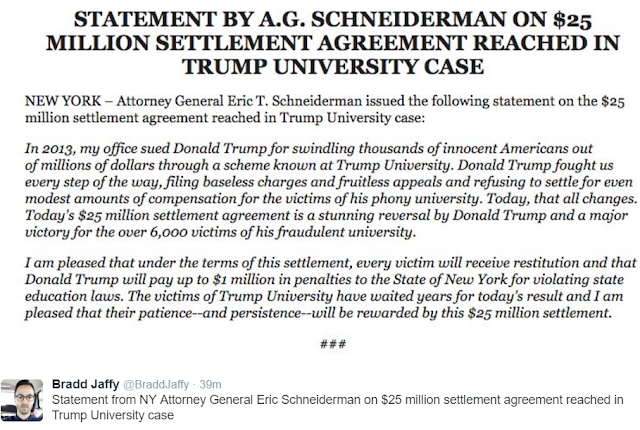