The amazing thing about Trump's win in Wisconsin was how normally responsible adults through caution to the wind and gambled away our national stability on a whim, just to "try something different." I'll bet not one of these voters would have taken such irrational risk with their own families. But here we are. 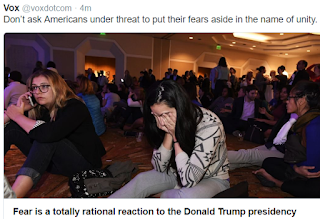 After just listening to my 17 old year son, a high school senior, tell me about students getting up on tables declaring "we won" and a sudden spate of fist fights over Trump-wear in the hallways, my often mentioned conservative friend in Milwaukee called me to tell me I no longer mattered.

In the 45 years I've known this guy, I've never seen the slightest inkling that he would go off like this, declaring Republicans the real Americans, the real working class heroes. He said voters rejected me and the Democratic Party's failed attempt to save a dying economy and country. He blamed low wages, low labor participation rates and socialism for the country's decline, which of course isn't true at all. My ideas and commentary were soundly rejected, and it didn't matter what I said anymore (sounds like my twitter trolls).

To him, I was now officially a voiceless second class citizen, a pariah, that must be controlled or stopped by his party of real Americans. Yikes, just four days after the election too. That is the "America" Trump was desperately selling, and now owns.


-In Detroit, students at a middle school broke into chants of “build the wall” in the cafeteria on Wednesday as Latino children at the school were reportedly crying.

Here are few more stories that got national attention: 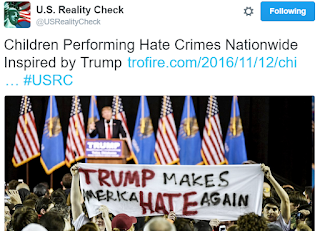 -In Philadelphia, graffiti — including swastikas, Trump’s name and the message “Sieg Heil 2016” — was found spray-painted on the windows of an abandoned fur store.

-In Minneapolis, the president-elect’s name was included in racist graffiti that was scrawled on the door of a high school bathroom.

-In an image of the vandalism at Maple Grove Senior High School posted to social media, “Trump Train” was written below “whites only,” “white America” and a vulgar message that included the N word. School officials said they are investigating.

-Some students told WCCO-TV they are scared to go to school. “I don’t feel comfortable, to be honest,” Atep Ndip said.

-In Durham, N.C., the message “Black lives don’t matter and neither does your votes” appeared on a wall in the city on Wednesday.

-In San Francisco, a homeowner decided to fly a Nazi flag over his home following Trump’s triumph.

-In Chicago, police are investigating the beating of a suspected Trump supporter who had stopped in an intersection.

Ring of Fire posted this:

Millionaire Donald Trump personifies the groteque side of business elitistism. He is greed and narcissism on steroids! Jerry Falwell Jr. re-framed the real Donald Trump this upside down way; "I think what we’ve seen this year is a peaceful revolution by the American people by the common man to take the government back from the elitists and the establishment.”

Bannon’s Breitbart, whose homepage in the early hours of Wednesday showed a pop-up

ad that said “Together we walk towards the fire”and advertised a T-shirt with the word “History” emblazoned across the front.

A vindication for the rawest elements of nationalism, notably the alt-right, the online-based white nationalist movement that rode to prominence on his coattails. They are now the tip of the spear of the ascendant ethno-nationalism. Richard Spencer, one of the figureheads of the alt-right, was thrilled. “The Alt Right has been declared the winner,” Spencer said. “The Alt Right is more deeply connected to Trumpian populism than the ‘conservative movement.’ We’re the establishment now.”

I had to include this insane video...