Normalizing the political extreme under the banner of "trying something else," a familiar cry from those disenfranchised rural voters, is obviously a dangerous thing. But since Wisconsinites have rejected my political ramblings outright, voting in even more Republicans, the point I'm making below should be discounted outright. Who the f**k cares: 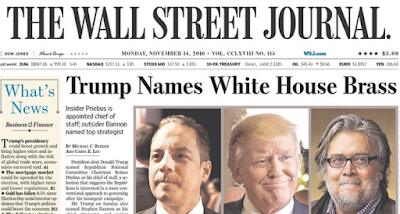 Think Progress: Major newspapers normalize Trump’s selection of white nationalist as chief strategist: Donald Trump appointed Steve Bannon as “Chief Strategist to the President” … the proprietor of Breitbart, a website that promotes and caters to the alt-right, a euphemism for people who promote white nationalist and white supremacist ideologies. Ben Shapiro, who worked alongside Bannon as Editor-at-Large of Breitbart, said that under Bannon’s leadership “Breitbart has become the alt-right go-to website… pushing white ethno-nationalism as a legitimate response to political correctness, and the comment section turning into a cesspool for white supremacist mememakers.”


Bannon described himself in 2014 as a “Leninist.”“Lenin wanted to destroy the state, and that’s my goal too. I want to bring everything crashing down, and destroy all of today’s establishment.

USA Today describes Bannon as an “ally” and “loyalist.”

The Washington Post also describes Bannon as an “outsider,” while devoting most of the front page to the local NFL team.

The New York Times describes Bannon as a “firebrand” in the headline.