Trump fabricates Ford move to Mexico crisis that never was. 4 more years of this?

Didn't see this one coming; now Trump is claiming to solve problems for the working class that were never real problems. And he will probably do this for 4 years.

But Ford never had any plans to move the Lincoln car plant to Mexico. Yikes. The NY Times had this headline.... 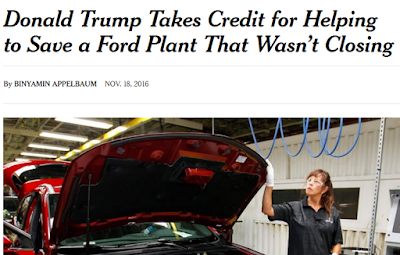 Ford had not planned to close the Louisville factory. Instead, it had planned to expand production of another vehicle made in Louisville, the Ford Escape. And the change had not been expected to result in any job losses.

Never one to learn their lesson, new agency Reuters ran with it... 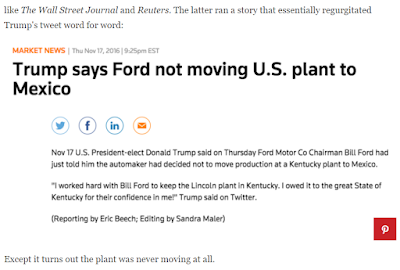 The company had planned to move manufacturing of the Lincoln MKC model to Mexico, but it was never going to close the Louisville facility—it was just going to make the Ford Escape there instead. Ford has since announced it will not move the MKC down south either.

The Journal seized on that detail to try to vindicate Trump, saying Ford's announcement "confirms Donald Trump tweet." But the tweet didn't say he'd kept a Ford model here—it said he'd saved the plant. The president-elect tried to claim credit for saving American jobs that were not at risk, and a number of outlets bought it wholesale. There's now a substantial number of people who believe Donald Trump saved those jobs through sheer Trumpiness before he even took office. This is false, and the ease with which Trump passed this off is a worrying harbinger of things to come.