Voter Suppression Worked, and Rural Wisconsin's "Hope & Change" guy Trump, will lift a finger to help...guess which one?

It's was interesting to hear the "2nd Amendment remedies" crowd of Trump supporters, who threatened a revolution if Trump didn't win, denounce Democratic protesters for not wanting to fall in line with their president elect narcissistic authoritarian alt-right leader:


Demonstrators in Madison and across the country took to the streets Thursday to express their outrage over Donald Trump’s unexpected presidential win, while Trump supporters took to social media and denounced demonstrators as hypocrites or worse for not accepting defeat in a democratic process. A crowd of hundreds of UW-Madison students at the top of Bascom Hill swelled to around 2,500 by the time it reached the steps of the state Capitol.

Leader Trump played that angle up... 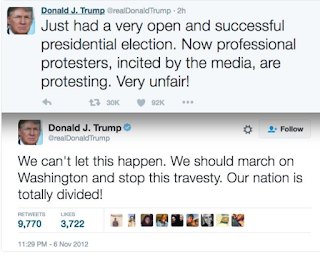 The best and most insightful Wisconsin coverage came from WPR's Shawn Johnson (audio below). It was an eye opener that made me realize ignored rural conservative voters wanted something more from their government, not less. Yet they've let their own representatives, who have ignored them, off the hook. So much for all that small government bullshit.

Trump was rural Wisconsin's "Hope and Change" candidate, and they got conned. WKOW's Greg Neumann confirmed all of this in his story below:


Rural voters who carried Trump to victory in Wisconsin, say he showed them respect.


"They thought they were left behind. They don't see a lot of what the federal government does for them."

"I liked that he was for the rural people, the working class."


Pete Carew of the village of Sturtevant said he was one of 1.4 million Wisconsin residents voted for Republican Donald Trump. Carew is tired of both parties saying every four years that they're going to change things for the better and doing nothing about it ... In the past, he always voted Democrat. Not this year.


"The last eight years I stood behind our president 100 percent. I won't say he failed miserably, but he fell really short. Short enough for me to say, 'Why can't we vote outside the box? Why can't we see something different?'"

Literally throwing caution to the wind and 100 years of "change" under the bus, Trump's hyperbolic empty promises were enough for many to take the leap:

"He did a phenomenal job of channeling the economic insecurities and poor people with an agenda that's actually going to devastate them," said Scot Ross, executive director of the liberal group One Wisconsin Now.

Shawn Pfaff, who worked on the successful 2006 campaign for former Democratic Gov. Jim Doyle, grew up in rural La Crosse County, where he said many voters feel economic anxiety and prioritize social issues like gun rights (were ignored).


"Maybe they're not hearing what's going on out there. Maybe there's heavier focus on the more urban areas of Milwaukee, Madison and some of the issues that dominate that area."

Maybe that's because Democratic legislators make government work for their voters, and Republicans don't. It's a formula that encourages an angry rural resentment, resulting in an anti-government base for Republicans. Trump promised to solve their problems by giving "deserving" rural voters a government solution...amazing:


Professor Katherine Cramer, who directs the University of Wisconsin-Madison's Morgridge Center for Public Service, wrote a book called "The Politics of Resentment: Rural Consciousness in Wisconsin and the Rise of Scott Walker." She said rural voters feel disrespected, misunderstood and cheated.


"Donald Trump really tapped into that. Because he came along and he said, 'You know you're right. You're not getting your fair share, and you're right to be angry about it, and you are hardworking people, and you do deserve more, and what you think you deserve is actually going to people who aren't as deserving.'"

Wisconsin's voter ID law caused problems at the polls in the city and likely contributed to lower voter turnout, Milwaukee's elections chief said Thursday. "We saw some of the greatest declines were in the districts we projected would have the most trouble with voter ID requirements," said Neil Albrecht, executive director of the city's Election Commission.

A spokesman for Republican Gov. Scott Walker insisted that voter ID had not hurt voter turnout.


"Voter turnout in this year's presidential primary was the highest since 1972 with voter ID in place, so to now suggest turnout was down in the general election because of it is wrong. We have made voting easy while ensuring it is hard to cheat. Lower turnout in the general election was true nationwide. It was not unique to Wisconsin or voter ID."

Walker's right, other Republican states had similar problems...I mean results. Just maybe the following comment will make it into the next argument to overturn voter ID:


Milwaukee's Election Commission Director Neil Albrecht said that four districts of the city with the most "transient, high poverty" residents experienced trouble with people struggling to meet the photo identification requirement. Previously, those voters were able to have "corroborating witnesses" vouch for them at the polls. "We had a lot of calls," Albrecht said. "There were college students with roommate situations or spouses where everything was in one spouse's name." He said calls reporting problems came from both those trying to vote and officials at polling places.

By the numbers proof...

Unofficial totals from Tuesday show Clinton lost by just 27,257 votes ... Wisconsin's turnout was lower than it had been in a presidential election for two decades as 66 percent of the voting age population cast ballots. It did not hurt Trump, who received roughly 1,500 votes more than Republican Mitt Romney did in the 2012 presidential election. Clinton, however, received nearly 239,000 fewer votes in Wisconsin than Obama did in 2012.

Sack of Lying Hypocrites to the end...

Some Wisconsin Republicans who used to be critical of Trump were singing his praises after Tuesday's results. That included Wisconsin Assembly Majority Leader Jim Steineke, who was once an outspoken member of the so-called #NeverTrump movement. Steineke called Trump "morally bankrupt con man." In April, he called Trump "a liberal… and a liar."

But Wednesday, Steineke said ... he "absolutely" accepts Trump as the Republican Party leader.


"I think there's no question that President-elect Trump brought a whole group of new people into the process. He's our president. I'm excited about our prospects moving forward."