The bizarre nationwide in-your-face Starbucks "Trumpcup" protest isn't just petty, but it's another mindless distraction that tells you all you need to know about Trump supporters and the conservative movement in general.

I also recognized this one during the campaign; Republicans wanted Trump to win so they could shove it in our faces. Period. These bad winners are everywhere; from standing on top of school lunch room tables declaring "we won" (my kids school), to calling up their life long friends saying Trump won and that they don't count anymore (that's what happened to me).

Watch the Starbucks "Trumpcup" campaign in action below, instigated by some of the biggest "victimized" as**oles the world will ever see:

Just hearing these Trumpian "victims" demand the names of Starbucks employees and managers like they would be added to some kind of database is frightening enough, but the fact that Trump himself has done nothing to tamp down these attacks is par for the course.

Here's one of the Starbucks "Trumpcup" instigators from Twitter, victimized "Baked Alaska," promoting the maniacal plan that includes posting more breathtakingly stupid videos like the ones above.


Baked Alaska: "They're going to freak out. They can't even write the name Trump on a Starbucks cup. How insane is this? Fascist scum, exactly. What's up fam."

Baked Alaska: "Come on, we have to stand up. The more people that do this, you know the more it normalizes people supporting Trump."

Gee, I hope we can normalize those people supporting Trump.

Baked Alaska got a few things wrong. Trump won the election (we know, we know) but not the popular vote and did not win in a landslide:

"Over half of the population?" That's if everybody old enough in America voted, which has never happened:

Baked Alaska said "they have to write Trump on the cup." Nope:


Starbucks has responded to the protest by clarifying that it doesn't require its partners to write or call out names. "Over the years, writing customer names on cups and calling out their names has been a fun ritual in our stores," a Starbucks spokesperson said. "Rarely has it been abused or taken advantage of. We hope and trust that our customers will continue to honor that tradition."

And what is it about Starbucks cups anyway?

This all comes after the controversy that plagued Starbucks last year as it introduced a plain red holiday cup that was markedly different from Christmas cups in the past. Joshua Feuerstein, a former pastor, called the new cups a "war on Christmas" in a video posted to Facebook.

And this goes without saying:


Starbucks’ CEO Howard Schultz was a vocal supporter of Hillary Clinton, but the #TrumpCup campaign against Starbucks is unusual in that it requires Trump supporters to go into the establishment they are protesting—and make a purchase.

Conservatives apparently found their voice in the "Trumpcup" protest, after unsuccessfully stirring up outrage over the green unity cup celebrating diversity: 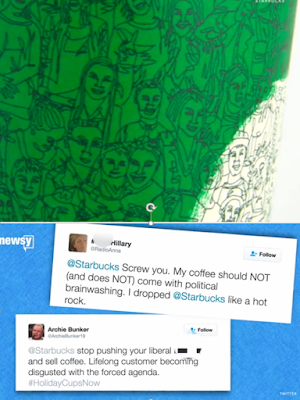