More Trump voters soon to be trashed on ObamaCare Exchanges!

I've been thinking about how I should react to all the Trump news, and his upcoming ominous presidency, and came up with a few conclusions.

There's nothing we can about the Trump voters gullibility, they've bought into every empty promise.

Voters faith in Trump is a mystery. He lied 70% of the time, according to Politifact. 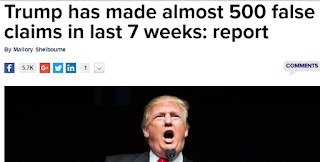 Why are the Democrats in chaos? They shouldn't be, since there focus was spot on. It's what they didn't do; flat out lie about everything. That convinced many voters to take the easy, "I'll fix it" way out. Many Democrats bought into it too, and will pay the hefty price.

I will watch with glee when rural Republican voters, who believe Trump is going to lower the cost of health care, see their premiums go through the roof. And they will lose their affordable insurance on the exchange. If they thought they were disenfranchised before, just wait. I'm ready for it. They're not, and they're going to go down with me: 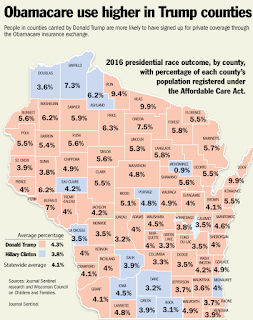 In winning what Republicans see as a mandate to repeal Obamacare, Donald Trump carried the Wisconsin counties that participate in a key part of the health program at higher rates

An analysis by the Milwaukee Journal Sentinel shows that people living in the 59 counties won by Trump enroll in the Affordable Care Act's private health insurance exchange at a higher rate than the 13 mostly urban counties that backed Democrat Hillary Clinton.

-In the counties won by Clinton, 3.8% of the population enrolled in the exchanges, or 81,280 in all. The two powerhouse counties for Democrats — Milwaukee and Dane — enrolled at below average rates of 4% and 3.2%, respectively, and few other Democratic counties have high usage rates.

Those who didn't vote for Trump will have to endure the consequences of his presidency. But that's okay, knowing we'll see every Trump voter get stiffed right along with everybody else. Everything will cost more as each and every free market/deregulation Trump promised is fulfilled.

Trump voters will be so invested emotionally in their "leader," that they never admit mistakes or be allowed to take the blame.
Posted by John Peterson, Democurmudgeon at 11/15/2016 11:28:00 PM