Feingold has edge in Senate Race.

Russ Feingold's chances of winning back his senate seat have improved since the last Marquette University poll:


11-3-16: A Public Policy Polling survey of Wisconsin voters finds that Russ Feingold leads the Senate race in the state 49/44. (margin of error 3.3%)

Just before that and overlapping the Marquette poll, a Real Clear Politics Poll revealed to a Fox News audience... 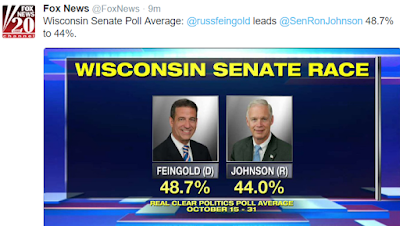 Feingold did defend his vote against the Patriot Act, but failed to call out big government Republicans and Johnson as the party of intrusive government - big brother prying into our private information and personal lives. Feingold's position of limited government took a beating by big government Johnson this time around because he loves the idea of surveilling law abiding Americans.

And if we took one big issue like common sense background checks for gun purchases, something Feingold did not emphasize in his closing ads, the race might not be so close. According to PP Polling:

84% of voters in the state support requiring background checks on all gun sales, to only 11% who are opposed to them.
76% of voters support prohibiting individuals convicted of committing a hate crime from buying a gun, to just 13% opposed to that.
74% support prohibiting anyone convicted of stalking or domestic abuse from buying a gun, to only 15% opposed to that.
80- 92% of Democrats in support, 74-84% of independents, and even 65-76% of Republicans.