Americans like Medicare the way it is, but that won't stop Paul Ryan from killing it.

We can’t talk about Paul Ryan’s Medicare reform plans without first pointing out how he brought up “saving” the program; with a lie. That should be a serious warning. Ryan’s plan must be pretty bad if he has to manufacture an even worse scenario to sell it:

That lie is so big even the media is bringing it up all the time.

Premium-Support: It’s important to know that regular old Medicare pays a fixed amount, and that amount determines what the GOP’s more privatized alternative, Medicare Advantage charges. Without that fixed price, Medicare Advantage would be open to dramatic price increases by doctors and hospitals, where skies the limit.
Republicans have already hit one road block, but like everything they do, they’ll plow through that too: 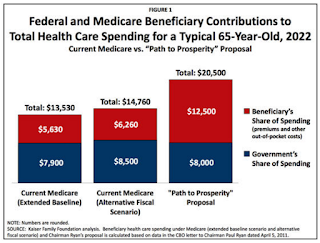 Remember how Republicans blew a gasket over the Democrats supposedly ramming ObamaCare down our throats in just one year, and without a Republican vote? Well, I think they changed their minds on that…

Dr. Tom Price—a top contender to become HHS secretary—said that congressional Republicans will push ahead with a Medicare overhaul within the first six to eight months of 2017, and that the Senate will pass it through an expedited budget reconciliation process that avoids a likely Democratic filibuster.

Authoritarian know-it-alls: Sure the public is against fundamentally doing away with Medicare, but as we’ve seen in Wisconsin, ideology and arrogant power “Trumps” what the public actually wants:

According to a mid-2015 Kaiser Family Foundation survey, 70% of Americans support keeping Medicare as it is today, with only 26% supporting a shift to premium support. Those percentages were similar among Democrats and Republicans. Just 18% of seniors supported turning Medicare into a premium-support program.

While some observers expressed surprise that Republicans want to leap into the perilous politics of Medicare reform after Trump’s narrow election victory, Tom Scully, who served as CMS administrator under President George W. Bush, was enthusiastic. “If they’re going to reform the ACA and Medicaid, absolutely they’ll do premium support, and they should, it’s the right thing to do,” he said. “They might get killed, but I don’t think they’re going to find it that politically difficult.”

NOTE: I'm still waiting for the first reporter to ask Paul Ryan how he expects seniors with diminishing mental capacity to shop for insurance and navigate new policies yearly. It happens to all of us, and for Ryan to ignore that flaw is irresponsible.