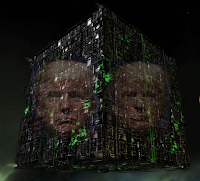 It won't take much before the scattershot right wing nationalist agenda, rolled out in the last 6 years, comes together under an alt-right president and begins to eat away at our American birthrights.

A fearful public just got an eye opening glimpse of their newly chosen leader and the drooling hoards of low information followers that now grovel at his feet. The now scapegoated liberals, minorities and foreigners don't have a place here anymore.

So why am I writing this? I just received this flag waving reminder that my son is required to take the same Civics test normally given to immigrants seeking citizenship. He better get a 60% or else. Only real Americans can rattle off this mindless trivia. Act 55 was a reaction to the Tonight's Show silly and highly edited "man on the street" interviews: 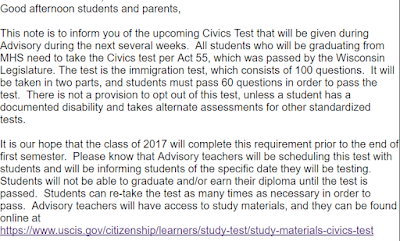 With Trump and 33 state government now blaze red, you can bet this Civics test will play a roll in disenfranchising those now living in fear under a repressive one party authority.

No Apologies: Watch what happens when WKOW's Greg Neumann asked WISGOP's Mike Duffey what Republicans could do or say to comfort the marginalized really scared people. After a number of tries Neumann gave up:

Here's John Oliver's take, and yes, he went on for 29 minutes. Great stuff:

Returning Dave Chappelle was in top form hashing out the Trump election: