Journalists everywhere are starting to acknowledge publically, in their articles, that Republicans aren't really about saving money. Hitzik's article is just another example. It's now becoming very obvious Republican voters are okay paying more for everything if it means their party is in control and cutting government. Despite these increases, many won't see much a of difference because of their subsidies: 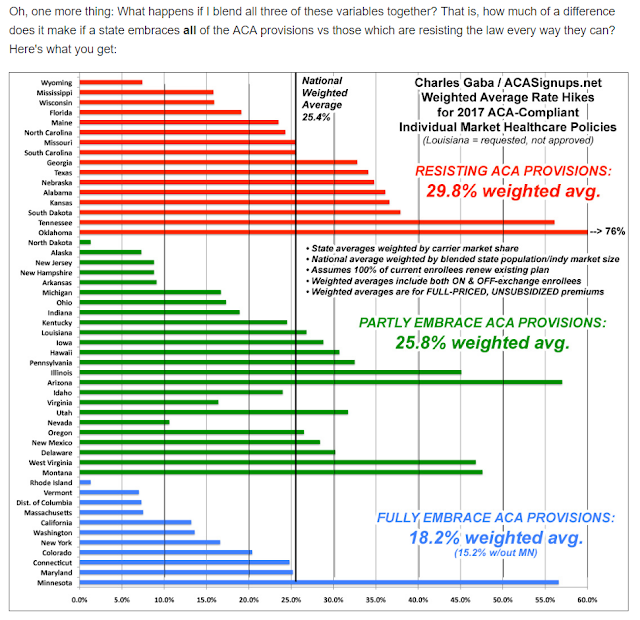 1. He finds that the weighted average rate increase for states that expanded Medicaid is 22.1% for 2017; among the 19 states that still have not expanded the program, it’s 28.9%.

2. In states that formed their own marketplace to enroll Obamacare consumers, the increase is 17.3%; among those that rely on the federal government’s exchange, healthcare.gov, it’s 28%.

3. Finally, among states that refused to allow consumers to remain in pre-ACA insurance plans that didn’t comply with the new law as of 2014, the weighted average increase is 18.8%; among those that capitulated to hysteria over canceled pre-ACA insurance plans by grandfathering the non-compliant plans for as long as three years, it’s 28.4%.Put these three factors together, and the states that fully embraced Obamacare will see increases of 18.2%. Those that fully resist will see increases of 29.8%.

4. The enrollment figures include on-exchange buyers and those who have purchased individual plans off the exchanges. The premium rates are pre-subsidy; the vast majority of exchange enrollees are eligible for government subsidies that can cut their monthly costs to as little as a few dollars per month.

5. The two states with the lowest increases, for instance, are bluer-than-blue Rhode Island and deep-red North Dakota.

6. The biggest divergence is between states with their own marketplace exchanges and those using the federal healthcare.gov ... it’s possible that the refusal serves as a proxy for all the silly, niggling ways a state government can throw obstacles in the way of Obamacare, such as refusing to fund “navigators” to help residents find the best plan for themselves, or failing to negotiate with insurers to secure the best prices.

7. The federal government’s decision to allow noncompliant plans to remain in effect was a reaction to a political uproar over cancellations of old plans, that “if you like your plan, you can keep it.” This always was a bogus controversy. As we observed at the time, the notion that loyal customers were being deprived of plans they absolutely adored, like the family dog, was almost certainly mythical.

8. Expansion states have lowered their uninsured populations and costs to local hospitals of uncompensated care. Moreover, according to the Kaiser Family Foundation, “states expanding Medicaid have realized budget savings, revenue gains, and overall economic growth.” Throw in Gaba’s findings of larger premium increases, and expansion Medicaid looks even more like a no-brainer. That should raise questions about the brains inhabiting the statehouses of the states still turning it down.

There is an important exception:


Minnesota, where the weighted rate increase is more than 55%, in part because the state’s basic health plan appears to have siphoned off a large number of people who would otherwise be in the Obamacare pool, driving up costs for the latter ... just a few years ago, Minnesota had among the lowest premiums in the nation. Minnesota is in worse shape because it has an unusually small individual market with an unusually large number of sick people.

Keeping the your old policy, what that means: Why did so many Republican states let those old policies continue? Well, they didn't do it because it saved people money; off exchange policies did not get subsidies...not a good way to pay a whole lot less:


Many health economists thought that grandfathering old plans was a bad idea. Their policyholders had been cherry-picked as low-risk customers, and keeping them out of the overall individual insurance pool was sure to force rates in the pool higher, while fostering confusion among insurers about the market they were serving in the ACA. Those concerns tended to be well-founded.

Expanding Medicaid is again a really good idea and money saver for states: 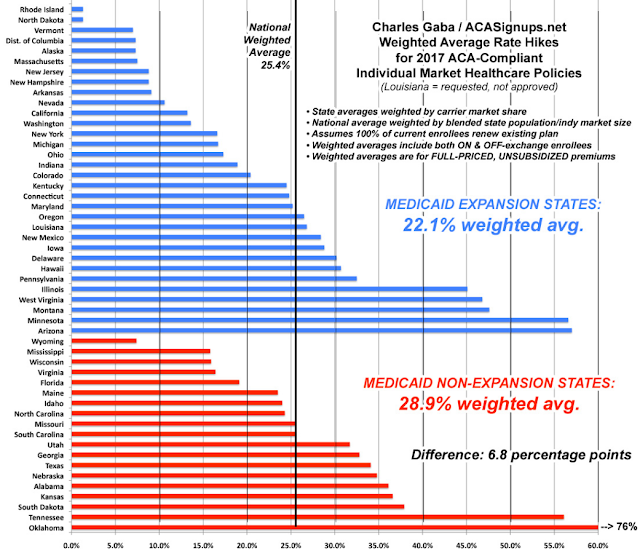 The Journal Sentinel's Guy Boulton broke it down what this means in the Milwaukee area, and the cost of health care is jaw dropping. The scam of high deductibles, co-pays and separate high deductibles for drug coverage proves insurers have gone too far.

The plan, offered by Common Ground Healthcare Cooperative, is one of the least-expensive in Milwaukee County. “I’ve talked to people who are exasperated,” said Todd Catlin of Transition Benefits in Brookfield. “They are just at wit’s end.” Yet the cost is roughly in line with what employers and employees pay for insurance.


“Health insurance was expensive before the Affordable Care Act,” said Donna Friedsam, director of Health policy programs at the University of Wisconsin Population Health Institute. “The difference is that people who could not get coverage before can get coverage.”