Walker ignores Feds request not to their Economic Prediction for State.

Scott Walker's rejection of the monthly jobs numbers during the recall election because of they were inaccurate and relied on a small survey sample, is now being used to tout the Philly Fed's grandiose economic prediction.

Any reporters want to confront Walker on his most recent con? From Politifact: 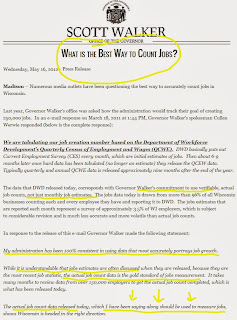 But the bank did not provide the information as a ranking and maintains it is not valid to make such state-to-state comparisons. What’s more, the number for each state is based in part on monthly employment numbers which Walker’s own administration has criticized as inaccurate. Still, the fact the bank’s own website seems to invite a comparison.

Should Walker continue to use the Fed's website prediction even after the owners of that site have asked him not to use those numbers? That's what it comes down too.