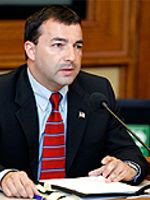 Awhile ago I wrote that State Rep. Scott Suder was an idiot. Name calling is a little out of character here at Democurmudgeon, but Suder was that one rare exception. After further research, and the Capital Times editorial below, it appears Suder is even a bigger idiot than previously thought.

Corrections Secretary Rick Raemisch … made a baffling statement that might cause Wisconsinites to wonder if personal ambitions and petty politics, rather than public safety, are driving policy decisions at DOC … When talking about the early release program with The Capital Times, Raemisch stated the program was a key to his legacy as corrections secretary and needed to be ramped up. He went on to say that he wants a program so powerful that no one would dare eliminate it.

Strange words from someone who often claims his agency is above politics and solely focused on public safety. I’d bet that most people think that a corrections secretary is supposed to manage our prison population, not create a legacy for himself.

Suder's attempt to conflate a legacy of sound corrections management with a supposed partisan agenda in nothing short of projection (the unconscious act of denial of a person's own attributes, thoughts, and emotions, which are then ascribed to other people. Thus, it involves imagining or projecting that others have those feelings.)

Suder's paranoid misgivings about a prisoners inner devils eventually terrorizing the public at large, is almost laughable, if it wasn't so frightening.

When asked about the rap sheets of these inmates, all the public gets from Raemisch is silence. What is DOC trying to hide? …prisoners are released … in secret, behind closed doors with zero public input … so he’s going to roll the dice and let as many prisoners out as quickly as he can before voters have a chance to weigh in on the matter in November … he has decided to open the prison gates a little wider and send thousands of dangerous criminals back into our neighborhoods before he’s out of a job … simply reckless and irresponsible.

Never mind the fact that every state that has done this saved massive amounts of taxpayer money, and successfully reintegrated prisoners back into society, which should be our main goal. It might even leave some extra money over for school funding. But punishment and scaring the public for political purposes is Suder's goal.

People are paying attention and they will hold the Democrats accountable for this dangerous policy that threatens the safety of every Wisconsin community that these inmates will now call home … I wonder what they tell their constituents when one or more of these career criminals are let loose in their communities?

Despite the documented proof, even from our neighboring state Minnesota, Suder wants to spend even more taxpayer money auditing the newly implemented program. It's not like the DOC won't be keeping track too, documenting the success and failure rates of early release prisoners, and making necessary adjustments along the way. The sooner the audit, the smaller the savings will appear. And that's what Suder is counting on.

Soon I will ask for a full audit of this program to shine some light on how much, if anything, the program is saving taxpayers.