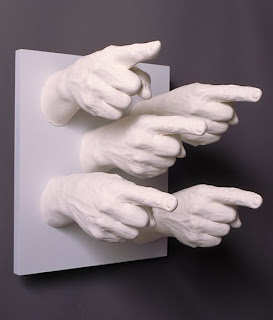 Republican love to play the victim. They are the victim of a voting public that “blamed” them for a $1.2 trillion deficit, ignoring health care, losing 8 million jobs and a global economic meltdown due to conservative free market principals. If you bring up what they did, they accuse you of the “blame game.” You know, it’s time to move on, and own the problems you’ve inherited.

So would it be any surprise at all to see the ironic irony of the GOP accusing Obama of blaming, pointing fingers and making excuses for the hole they left us. If Obama were smart, he would blame himself for everything the Republicans did over the last 14 years. Think I’m kidding? Leave it up to Fox News to make the case:

That was the advice President Obama gave to a graduating high school class in Michigan Monday night -- advice that sent off an irony alert among Republicans who accuse the president of having "spent his tenure" doing exactly that.

According to the Republican “Bizarro World” logic, their economic sins were absolved when Obama became president, and finger pointing is out of line. It’s even out of line when Republican lawmakers blame themselves for spending taxpayer dollars like drunken sailors and ran up the debt. Finger pointing, excuses and passing the buck…to an earlier time of deregulation and charge card free market economics. But real irony is lost on these thoughtless ideologues.

Senate Republicans reacted quickly to the speech, sending out a "best-of" list of instances in which Obama was "looking around for someone to blame." The quotes showed Obama using Bush as a scapegoat for everything from the deficit to America's image abroad.

Like that never happened? My brain is already hurting.

One of the president's favorite rhetorical devices is the figurative "mop" he uses to clean up what he says were the mistakes of his predecessor. "I don't mind cleaning up the mess that some other folks made. That's what I signed up to do," he said at a Democratic fundraiser last October.

If only Obama would stop reminding Americans how Republicans got us to this low point in our history. It’s time to stop making excuses, finger pointing, and passing the buck and take ownership of everything Republicans did wrong. They’ve got an election to win.
Posted by John Peterson, Democurmudgeon at 6/08/2010 12:53:00 PM