Not Just Spending your Money, but Saving it Creates Jobs! So says Gov. Candidate Mark Neumann 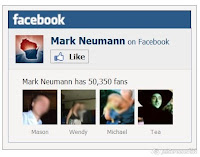 What we need are sound economic policies (ignore the last 9 years of Republican devistation), from Mr. Jobs and governor candidate Mark Neumann.

Outside the (Democratic) convention, Republican candidate Mark Neumann showed up, and he was promptly surrounded by Barrett supporters. They waved signs and heckled him. Neumann answered their questions and told the crowd he respects them, but they can't afford Barrett as governor.

I believe in a smaller government and less spending, and I understand when people keep their own money they'll save or spend it, which leads to job growth and economic development,' Neumann said.

There you go, even those who just save their money create jobs by….by…what was that again?"
The only ones saving their tax cuts will be the ones who don't need to spend it. Any guesses who that might be?
Posted by John Peterson, Democurmudgeon at 6/13/2010 05:47:00 PM