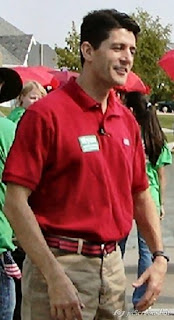 Since I post anything Paul Ryan, I couldn't resist the following story. Lou Kaye at Rocknetroots put together this beautiful example (in blue below) of CBO number hypocrisy from Rep. Paul Ryan, the media's do-no-wrong GOBP economic "genius." It's so simple, even a low information tea partier can understand it.

(Road Map on Social Security) Makes the program permanently solvent, according to the CBO...

Makes Medicare permanently solvent, based on CBO estimates and consultation...

I asked the CBO what our tax rates would have to be when my three children are my age....The answer was shocking.

The charts ... were prepared using data from the CBO and GAO and reflect the country's dire fiscal situation.

During an interview in March on The Mark Levin Show, Ryan had little respect for CBO estimates when Democrats' drew on them for health care reform.
DirectorBlue Blog Excerpt:

If you put in front of them a manipulated bill and all of the smoke and mirrors, they have no choice but to score the bill as you wrote it. And if you write it intentionally to disguise all of this, then you'll get a disguised estimate, and that's what we have here.

One man's garbage is another man's treasure. Unless you're a republican. Then it's basically all one category.

Email to your favorite conservative crackpot.
Posted by John Peterson, Democurmudgeon at 6/21/2010 11:06:00 AM