After Losing 515 Teachers, Can We Expect to see Better Grades and Smarter Kids? GOP’s Disaster Capitalism a Roaring Success 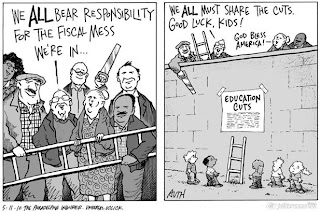 Are the teachers in Milwaukee getting laid-off because they're all overpaid and lousy? No, they’re being let go because there isn't enough money. Another sad reason schools in brew city aren't doing as well as they could. Next year, after no improvement due to the downsized teaching staff and spending, more teachers will be trimmed away…because of money. What a plan.

Milwaukee Public Schools mailed layoff notices to 482 teachers Friday, the first time teachers in the district have been laid off since 1982. The notices also were sent to an undisclosed number of substitute teachers. Layoff notices already were sent to 233 educational assistants in late May ... The School Board approved the administration's $1.3 billion budget, which included provisions for eliminating 682 positions from the payroll.

Now where did I put those private school brochures claiming to be the best thing since sliced bread? That’s all an informed parent like myself will ever need to see, since I know better than any trained professional.
Posted by John Peterson, Democurmudgeon at 6/12/2010 11:35:00 AM