Olbermann Coins “GOBP.” Thank you Texas Rep. Joe Barton and the Apology Heard Around the World. 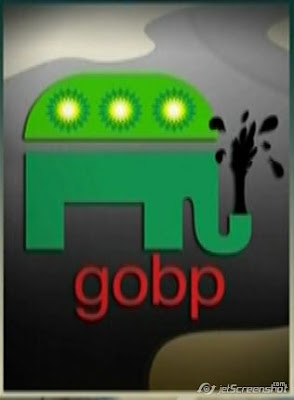 From this point on, the GOP will now be referred to as GOBP, celebrating its blatant anti-consumer pro-business free market position and political representation. Shocked Gulf state conservatives were thrown under the bus for a few campaign donations from big oil. Corporate governance isn’t looking so good right now. AP:

Texas Republican Joe Barton, the House's top recipient of oil industry campaign contributions since 1990, apologized Thursday for apologizing to the chief of the British company that befouled the Gulf of Mexico with a massive oil spill.

His double mea culpa plus a retraction, executed under pressure from fuming GOP leaders … "I apologize," Barton said to BP CEO Tony Hayward, "I do not want to live in a country where any time a citizen or a corporation does something that is legitimately wrong is subject to some sort of political pressure that is - again, in my words, amounts to a shakedown," Barton said. "So I apologize."

Incensed at the gift Barton had given Democrats, Republicans came close to stripping Barton of his post as chairman-in-waiting of the House Energy and Commerce Committee.

The right wings “wicked witch” of the left, another anti-feminist fantasy based caricature, had this honest reaction:

House Speaker Nancy Pelosi said, "While people in the Gulf are suffering from the actions of BP, the Republicans in the Congress are apologizing to BP."

An epiphanic moment for the country.