Republicans Continue to Get Press Over Phony Voter Fraud Myth. How About the Facts! 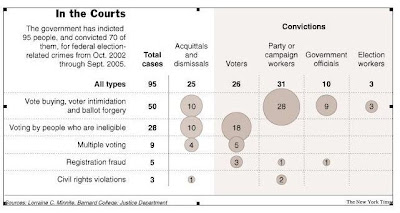 To show how extreme Republicans are about perpetuating the myth of voter fraud, they actually asked the State elections officials to have those who have failed ID checks to cast a provisional ballot. That would have resulted in disenfranchising 22% of the voters who registered but had some mismatch in their driver records.

According to the Wisconsin State Journal, “Many of those matches are likely typos or other problems, such as someone appearing under a name and a nickname - David and Dave, for instance - in different state databases, transposed numbers, missing middle initials.”
The Government Accountability Board rejected the idiotic Republican request
That didn’t stop one party member from issuing this fear laden hyperbolic warning about voter fraud.
"This is really unbelievable — let everyone vote and see what happens," said Bob Spindell, election commissioner for the city of Milwaukee and chairman of the GOP's 4th Congressional District. "This could be the presidency of the United States on the line here."
According to the Milwaukee Journal Sentinel from Feb. 27, 2008,
A Milwaukee police investigation of a badly managed general election in 2004 describes a litany of, well, bad management. The report blames shoddy recordkeeping by city election officials and error-prone poll workers for flaws that allowed illegal and improper voting in 2004. One irony: While the state Republican Party touted the report, investigators found almost no evidence supporting the GOP's claims of double voting and invalid addresses in the election. The report indicates the Election Commission did three separate counts of votes. Each resulted in a different total, none of which matched the official totals reported to the state. In the UWM’s campus area, It found 2,101 ballots cast at the ward but only 1,887 people recorded as voting, part of the unexplained voting gap. Homeless voters: The report notes homeless residents are eligible to vote, but found cases where some are registered in multiple locations.
In the end, U.S. Attorney Steve Biskupic said there had been no findings of widespread fraud. About a dozen cases were pursued, to mixed results. One problem Biskupic cited was the flawed Election Commission records.
An April 12, 2007 NY Times article wrote:
Five years after the Bush administration began a crackdown on voter fraud, the Justice Department has turned up virtually no evidence of any organized effort to skew federal elections, according to court records and interviews. Although Republican activists have repeatedly said fraud is so widespread that it has corrupted the political process and, possibly, cost the party election victories, about 120 people have been charged and 86 convicted as of last year.
Many of those charged by the Justice Department appear to have mistakenly filled out registration forms or misunderstood eligibility rules, a review of court records and interviews with prosecutors and defense lawyers show. In Miami, an assistant United States attorney said many cases there involved what were apparently mistakes by immigrants, not fraud.
Take a look at the above chart. Be affraid, be very affraid.
Posted by John Peterson, Democurmudgeon at 8/28/2008 10:53:00 AM